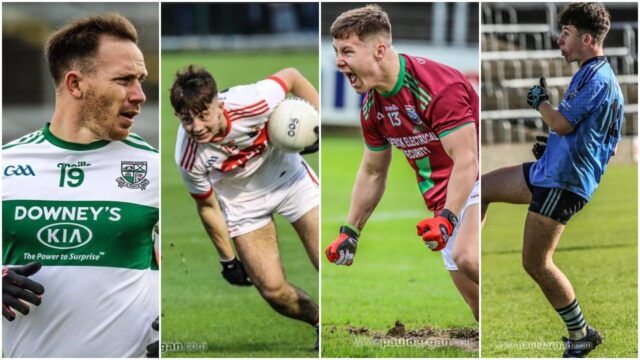 The action this afternoon gets underway with the meeting of Ballyroan-Abbey and Portlaoise.

Padraig Clancy’s charges are unbeaten this year while Kevin Fitzpatrick’s men come into the game off the back of three straight wins.

Beaten quarter finalists in 2020, Portlaoise have reached this stage by being resilient rather than brilliant.

Defeated by Courtwood in Round 1, they staged a late comeback to defeat Ballyfin in Round 2. They then edged out St Joseph’s before requiring extra time to see off O’Dempsey’s the last day.

Portlaoise’s accuracy in front of goal has been their Achilles heel all season. They have amassed double figure wides in each of their championship matches and must correct this if they want to have any chance of being successful.

But they have used their bench effectively in all of their games – and none-more-so than in the last round against O’Dempsey’s.

They made four changes by the 36th minute and those players contributed 1-9 of their total.

Tipped by some as outsiders for the championship, Ballyroan-Abbey have not disappointed and won all three of their games to date.

They were relatively comfortable in Round 1 against Killeshin before requiring extra time against St Joseph’s. A strong second half saw them past Courtwood the last day.

2021 was the first time in three years that Ballyroan-Abbey did not compete in the Minor A final with players from their 2018 and 2020 successes, along with their 2019 final defeat to Emo-Courtwood, now heavily featuring in the team.

Aaron McEvoy will be a doubt for this one though after being forced off with injury.

The bookies have Portlaoise as favourites, but don’t be surprised if Ballyroan-Abbey pull off a shock.

Local bragging rights are on the line – as well as a place in the final – as Emo and Portarlington meet.

After winning the delayed 2020 final with a somewhat comfortable victory over Graiguecullen, Portarlington’s have since eased through the championship with wins over Ballyfin, Courtwood and Stradbally.

Martin Murphy’s men have the meanest defence of the teams that remain in the competition.

They have only conceded one goal in the championship and that came via Jack Cleary of Ballyfin in the delayed 2020 semi final.

Portarlington are so strong on each line of the field that the likes of Colin Slevin, Jordan Fitzpatrick, Eoin McCann and Stephen O’Neill are among those who have to be content with places on the bench.

Emo have had an up and down couple of months. John Strong’s men lost the 2020 semi final to Graiguecullen and then also lost Round 1 to O’Dempsey’s.

They were somewhat fortunate to defeat The Heath and Rosenallis subsequently but were excellent against Graigeucullen in the quarter final two weeks ago.

Aside from the Round 1 loss to O’Dempsey’s, Emo have scored at least one goal in each of their championship matches this year.

Two against The Heath, three against Rosenallis and one against Graiguecullen – goals help you win games and they will be hoping to keep it up against this Portarlington defence.

However, Padraig Kirwan is due to head away shortly with the army on overseas duty and will be a massive loss if unavailable this afternoon.

Regardless, defending champions Portarlington should have enough to progress.

SEE ALSO – In Pictures: Park-Ratheniska celebrate in style as they return to senior for first time since 1997