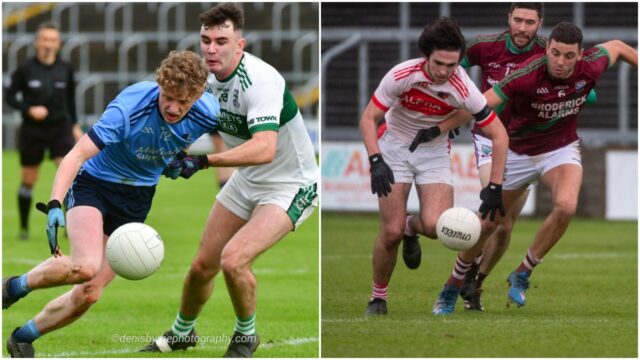 The penultimate football weekend of 2021 came to a conclusion on Sunday with the Laois SFC semi finals.

While Saturday saw an upset in the Ladies final as St Conleth’s toppled favourites Sarsfields.

Sunday was all about Senior as Portlaoise got the better of Ballyroan-Abbey and then Portarlington saw off Emo.

Below, we will take a look at the main talking points from both of those matches.

Before yesterday, Portlaoise hadn’t been great. They lost to Courtwood in Round 1, scraped past Ballyfin in Round 2, St Joseph’s in Round 3 and then required extra time in the quarter final against O’Dempsey’s.

The running theme in all of those games was their inaccuracy in front of goal but that completely changed yesterday. The Town hit just one wide in the first half where they scored 11 points and led by eight.

Their shooting dropped off a small bit in the second half but with their defence just conceding six points – only two from play – they were as comfortable as they could be.

2 – The return of Graham Brody

An unfortunate collision between Davin McEvoy and Michael O’Connell in the opening minutes of the game resulted in the Portlaoise goalkeeper having to be substituted through injury.

That paved the way from Graham Brody to make his first appearance of 2021 – and he looked like he had never been away.

His kick-outs were flawless and his ability to carry the ball out of defence added an extra dimension to the Portlaoise attack. Manager Kevin Fitzpatrick will have a big decision to make in two weeks time as to who gets the nod for the county final.

Before a ball was kicked, Emo’s chances of pulling off a shock were hampered with the news that Padraig Kirwan would play no part as he prepares to head abroad with the Defence Forces.

And the odds were further stacked against them when Finbarr Crowley picked up what looked like a serious leg injury in the opening few minutes. Two of their quickest and most dangerous players were now gone.

John Strong’s charges battled on gamely despite this and were within striking distance of Portarlington as we headed for the final quarter where they ultimately ran out of steam.

Portarlington had 33 attempts on goal yesterday but finished with just 10 points.

That will be a worry – but the manager can take great satisfaction from the fact that his defence maintained their fine form.

They only conceded four points, two from play, and also kept a clean sheet for the fourth time this season.

We’re into November now and the weather is starting to deteriorate – which is having a huge impact on the O’Moore Park pitch.

Groundsmen have been busy sanding the surface in a bid to keep it playable and it will benefit from just having one day of games this week rather than the three last week.

In a normal year, the pitch would be getting a rest now but it still has two more weekends to go.

On Sunday November 14, the adult football calendar will come to an end in Laois with a double header.

Up first, Barrowhouse will meet Ballyroan-Abbey’s second team in the Junior A final before the meeting of Portlaoise and Portarlington in the Senior final.