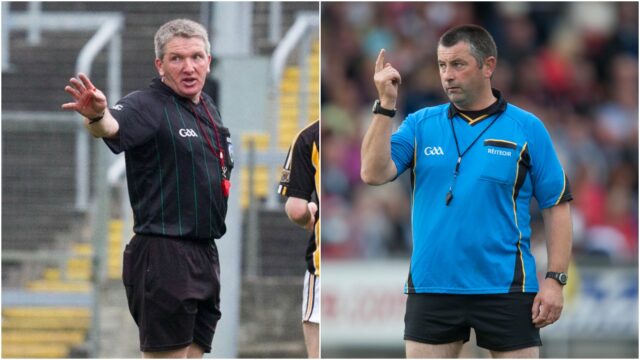 John Lalor from Shanahoe will take charge of his fourth Laois senior hurling championship final this Sunday when he’s the man in the middle for the meeting of Borris-Kilcotton and Clough-Ballacolla in O’Moore Park.

Lalor previously refereed Clough-Ballacolla’s breakthough county final success in 2009 when they beat Portlaoise as well as the 2014 decider when Rathdowney-Errill beat Camross.

He was also in charge for the drawn 2016 final between Borris-Kilcotton and Clough-Ballacolla.

This year, Lalor has refereed group games in each round – Rathdowney-Errill v Camross, Castletown v The Harps and Castletown v Clough-Ballacolla – as well as the quarter-final between Castletown and Camross.

Colt’s Padraig Dunne will referee the Premier Intermediate final between Ballinakill and Ballyfin in Sunday’s curtain raiser. Dunne refereed the 2019 final between The Harps and Rosenallis at this grade also.

Indeed it’s a role reversal from the 2020 finals when Lalor refereed the Premier Intermediate final and Dunne was in charge of the senior final.

The hurling finals on Sunday are the main GAA activity down for decision this weekend with early round U-20 football games and inter-county underage activity also pencilled in over the next week.

First-named team has home advantage; all games at 3pm unless stated otherwise

Adrian Murray Cup U-15 Hurling Academy
Laois v Clare in Centre of Excellence at 11.30am

Adrian Murray Cup U-15 Hurling Academy Round 1
Laois v Wexford in Centre of Excellence at 7.30pm

Adrian Murray Shield U-15 Hurling Academy Round 2
Laois v Wexford in Centre of Excellence at 7.30pm