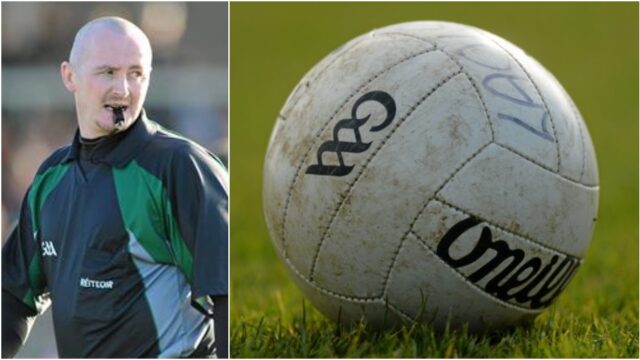 Brendan Hickey from the Graiguecullen club will referee this Sunday’s Laois SFC final between Portarlington and Portlaoise in O’Moore Park.

It will be a first men’s final of any sort for Hickey to take charge of in Laois – though he has refereed a senior county final in Kildare previously, having been the man in the middle for the 2010 decider between Sarsfields in Kildare.

Hickey is originally from the St Laurence’s club in Kildare and took up refereeing in 2008 after his playing career ended.

He refereed for a number of years in Kildare before moving to live in Laois and linking up with the Graiguecullen club. He then also began refereeing in Laois.

He was a selector alongside Paul Bealin when he was managing Graigue and Hickey was involved with the Graiguecullen ladies football team.

He also featured on the inter-county referee’s panel and officiated at Leinster minor and U-20 games as well as being a fourth official at games in Croke Park.

This year he has refereed the Portarlington v Emo semi-final, the relegation playoff between Arles-Killeen and Ballylinan and the Round 2 game between Portarlington and Courtwood.

At intermediate level he did the opening round game between Crettyard and The Rock as well as the semi-final between Timahoe and Mountmellick.

Hickey will be joined by umpires Pat Timmons and Noel Fleming from Graiguecullen as well as Brendan Kelly from Athy and Michael Foley from Monasterevin.

The Portlaoise v Portarlington Laois SFC final takes place in O’Moore Park this Sunday, November 14, at 3.30pm. It will be preceded by the JFC ‘A’ final between Ballyroan-Abbey and Barrowhouse.