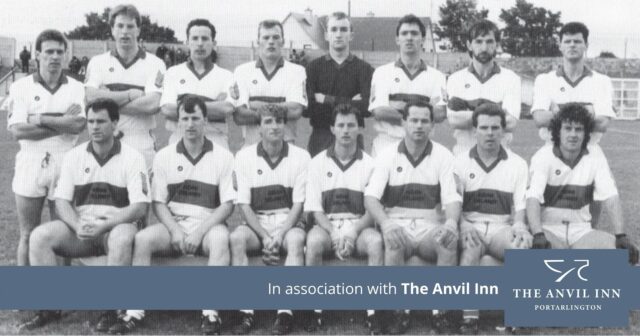 Given the size of the two towns and their respective proud histories, Portarlington and Portlaoise have only met twice previously in county finals.

Portarlington won the 1959 final, their third of that decade, but in 1991 Portlaoise turned the tables.

At the time Portlaoise were coming to the end of a glorious era, one that had seen them win six Laois senior titles throughout the 1980s as well as three Leinsters and an All Ireland.

But Portarlington had won the 1988 final, when they’d beaten Portlaoise in an opening round, and while St Joseph’s had claimed the title in ’89, Portlaoise were back on the winning podium in 1990.

In 1991, however, they were well beaten by St Joseph’s in the opening round and sent on the circuitous route through the losers section. In all the format of the championship meant they had to win five games in a row to even reach the final – seeing off Annanough, Ballylinan, Ballyroan, Timahoe and Emo.

Port, who were under the management of former Offaly great Jody Gunning, had a more straight forward route as they went through the front door with wins Park-Ratheniska, Stradbally and then champions St Joseph’s in the semi-final.

Port’s semi-final win meant they went in as favourites and much was made in the buildup of the age of Portlaoise’s team, who were trained at the time by Mick Lillis, a long-serving member of the Portlaoise half-back line.

And Lillis did some job of talking down Portlaoise and talking up Portarlington in a pre-match interview with Dermot Crowe in the Leinster Express.

“I’d rate Port very highly,” said Lillis. “People I meet around the county, neutrals, they all say to me Port are playing like Portlaoise used to play. The great Portlaoise team of the early 80s.

“Port took Joseph’s to pieces in a manner which, to be honest, I hadn’t seen before from any team in Laois.

“They played some tremendous football …. I just hope they don’t over run us with legs and power the way they did Joseph’s – that’s the thing I would fear. Joseph’s were a little bit on the old side maybe and we are the same.”

In a spectacular show of playing down his side, Lillis then drew attention to the age profile of the Portlaoise team.

“We aren’t as mobile as we used to be … I’d safely say that three or four will go. I would imagine without writing anyone’s obituary for them, you’d have three or four that won’t feature again.”

The view that Portlaoise weren’t as strong was a genuine one. Laois had reached the Leinster final that summer and there was no Portlaoise player involved. Indeed their quarter-final clash with Timahoe had been played on the weekend of that Leinster final.

While Crowe’s headline on his match preview said that a “tantalising clash looms”, it didn’t turn out that way.

Instead Portlaoise won the lowest-scoring final of the past 70 years by 0-7 to 0-5.

Experience beat youth was the general theme of the post-match coverage.

“Pure mental toughness and resilience denied Port of their ultimate ambition and the young challengers could have no complaints.”

Portlaoise had led 0-5 to 0-3 at half time but had played with a very strong wind. Port had the elements at their back in the second half but the Portlaoise defence held firm.

Port had got early points in the second half from Derek Coogan and Dermot Murphy but with Tom Prendergast and Tony Dunne finding the range for Portlaoise, they weren’t to be denied and Port failed to score for the final 20 minutes of the game.

“Portlaoise once again showed their metal in finals,” wrote Crowe in his match report, “extending their awesome reputation with a performance that wasn’t pretty but, nevertheless, effective and rewarding.

“They showed great hunger and concentration as well as calm and deserve great credit for getting on with the job so effectively.”

“At half time I asked them to dig deeper than they have ever dug in their lives and that’s what they did,” said Lillis afterwards as centre-back as captain Liam Duggan accepted the Jack Delaney Cup. 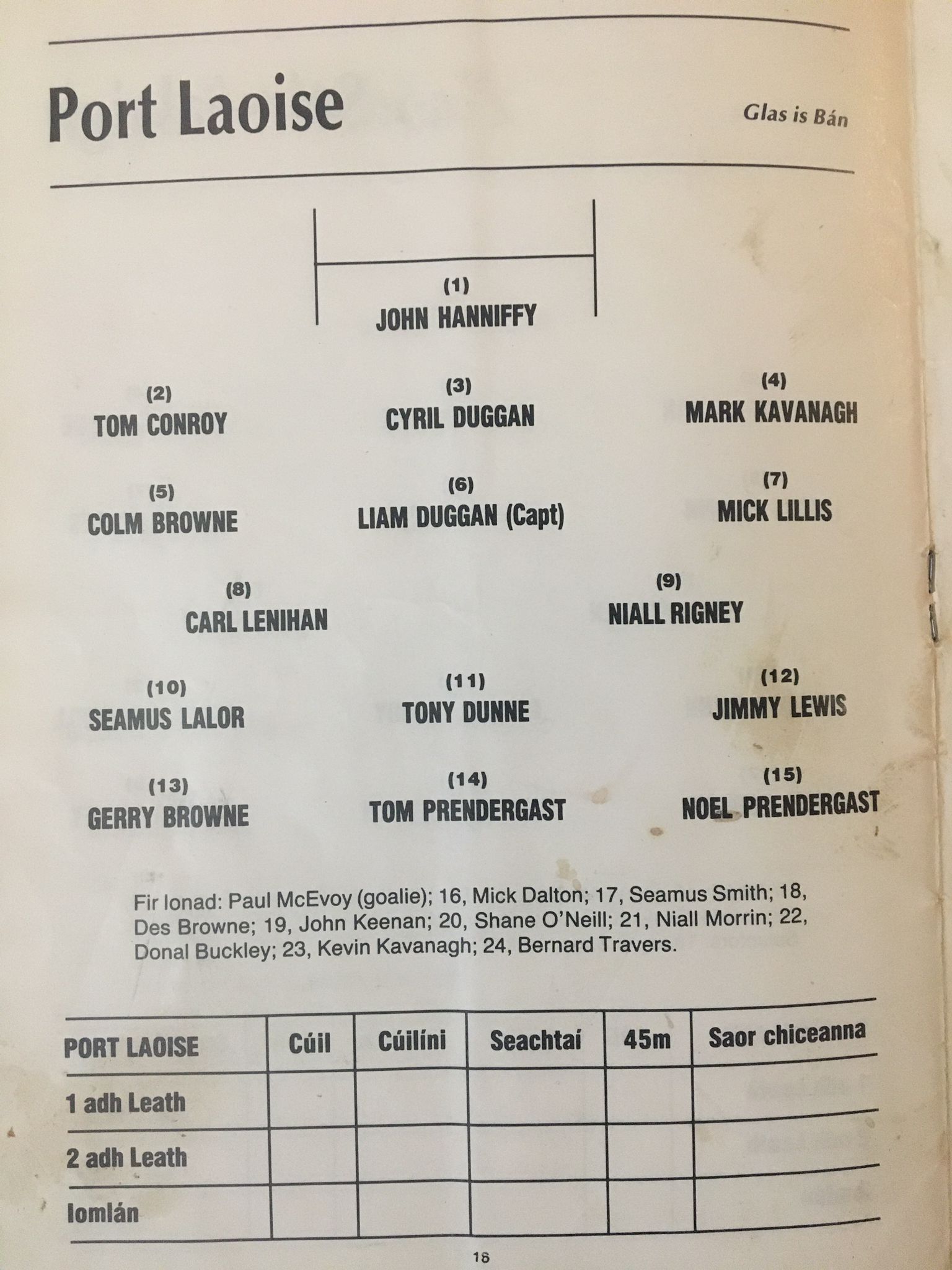 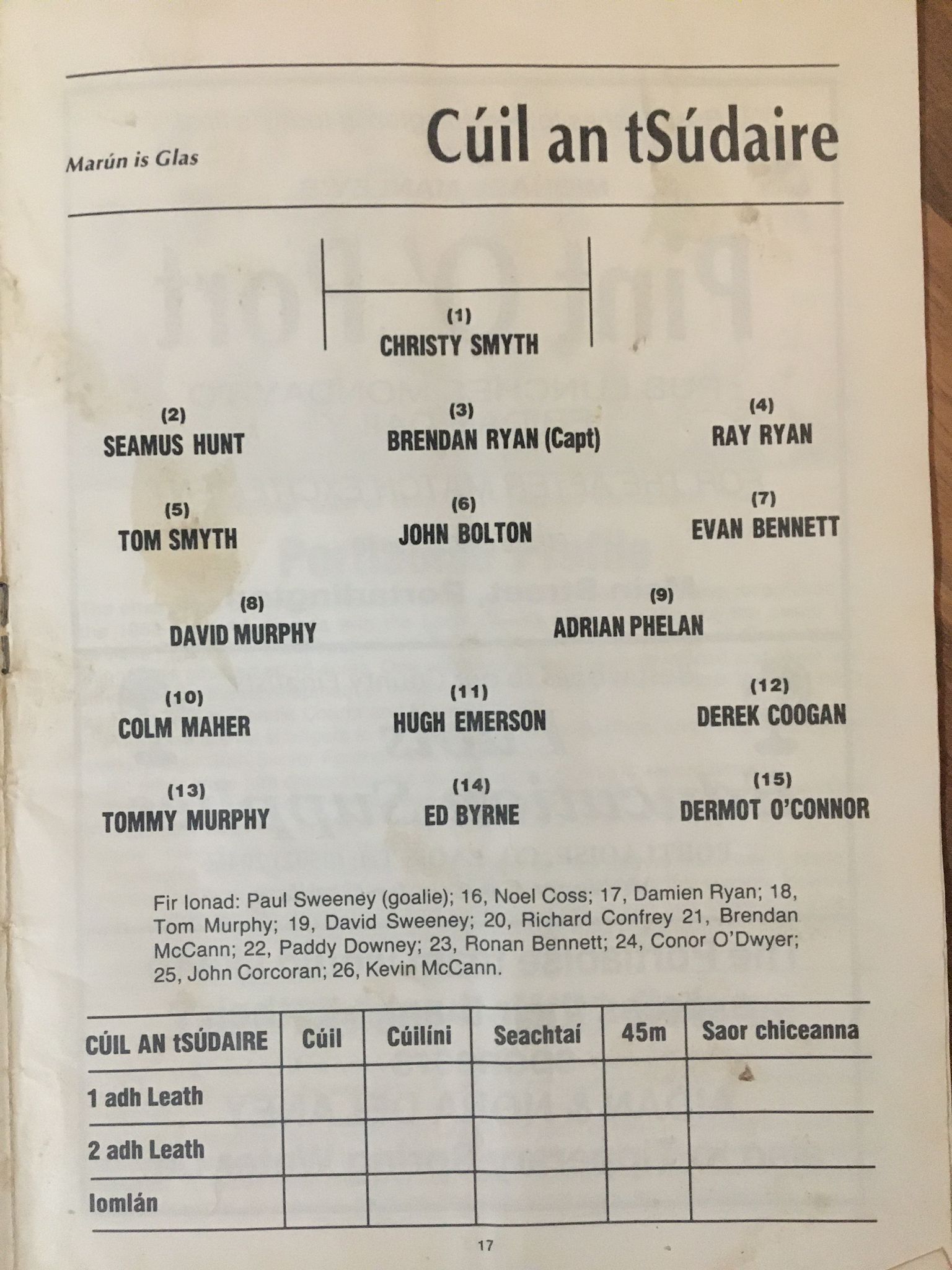 As it turned out it was the final time that many of that Portlaoise team would play in a county final – Colm Browne, Lillis, Gerry Browne, Jimmy Lewis, Noel Prendergast and Tom Prendergast had all been on the team that won the All Ireland in 1983 and their club careers would finish up in the years that followed.

Many of that team did go and serve as club managers with Lillis in charge in 1999 and again in the 2000s. Tommy Conroy guided them to the the All Ireland final in 2005 and Mark Kavanagh, Karl Lenihan and Niall Rigney all had spells as manager too.  Colm Browne managed Laois and a handful more have had other roles with club and county.

For Portarlington, who’d dominated underage football in Laois in the 1980s, Crowe observed in the closing paragraph of his report that while it was a frustrating day, “there’s no reason a championship winning side cannot be built from the acute disappointment of Sunday”.

It took a couple of years but they got back to the final in 1995, which they won, and were denied back-to-back success in 1996. 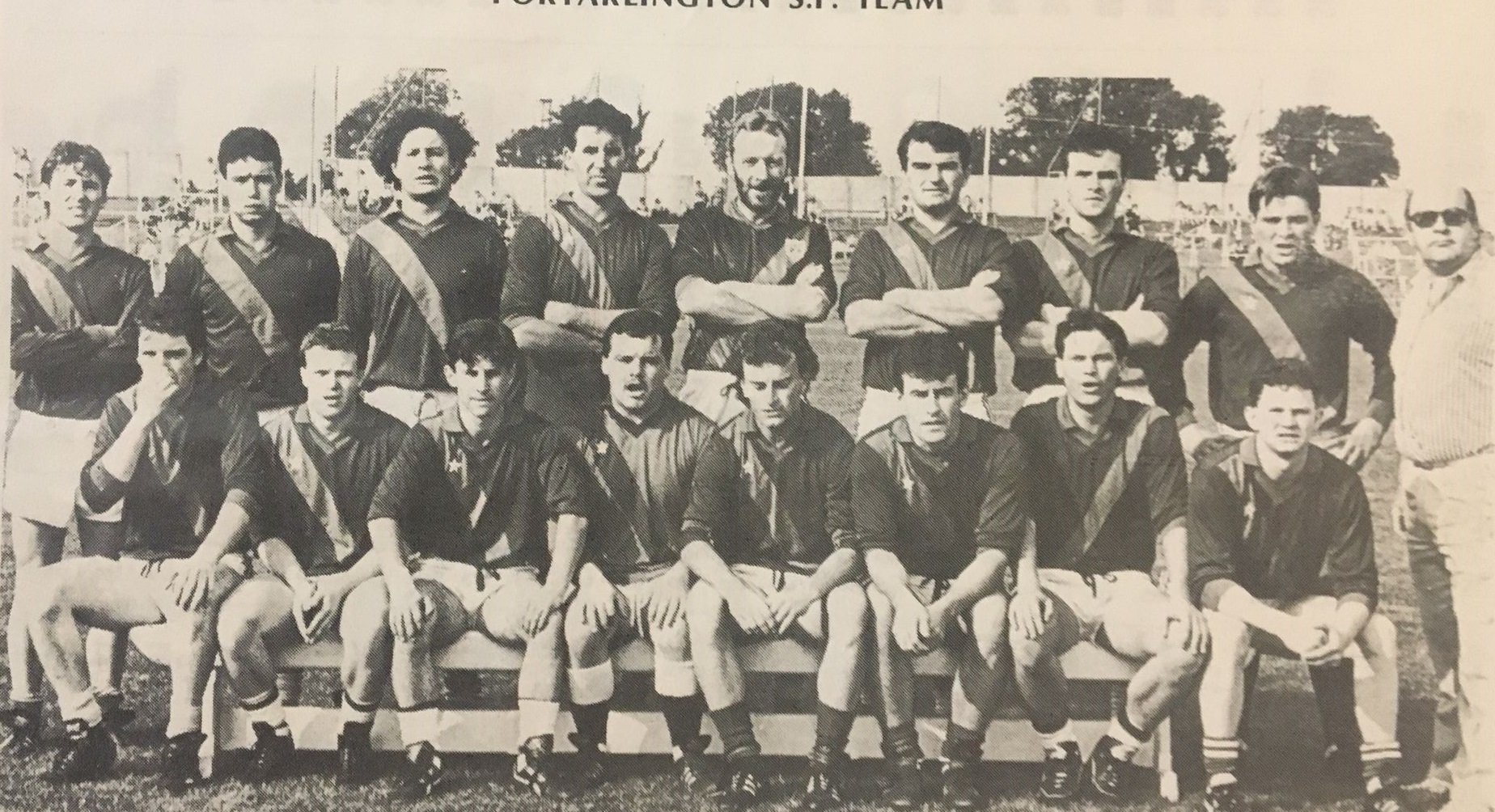