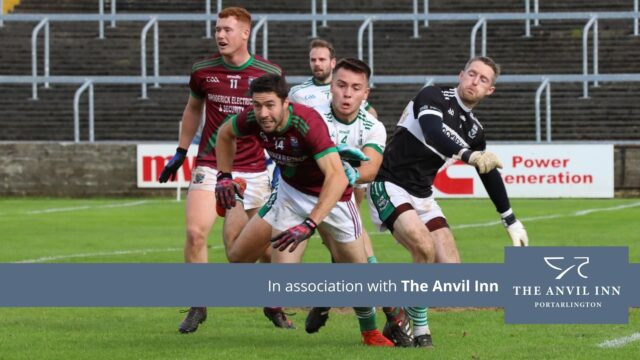 On Sunday the Portarlington footballers will seek to put Laois SFC titles back-to-back for the first time since 1955, incidentally a year when the club also managed to win the championship twice in the same year.

Standing in their way in O’Moore Park will be Portlaoise, by far Laois’s most successful club of all time.

A senior semi-final appearance in 2017 was their first since 2001 and they followed that up by getting back to the last four again in 2019.

It was Martin Murphy’s first year in charge and they’d blown hot and cold that year, drawing with both Ballyroan-Abbey and Graiguecullen albeit winning the replays on both occasions quite comfortably.

The semi-final draw brought Portarlington and Portlaoise together. Portlaoise, under Niall Rigney after he’d taken over from Malachy McNulty, were in search of a third title in a row.

Apart from a big win over Ballylinan in the opening game, they didn’t appear to be at the peak of their powers, struggling past Courtwood and St Joseph’s to book a 13th semi-final in succession.

And we got an absolutely thunderous game. Played in dreadful conditions after a couple of weeks of bad weather, Portarlington raced into a big early lead.

Jake Foster got a goal in the opening minute and with the two Murphys causing huge problems they opened up a seven-point lead. Brian McCormack pulled a couple back for Portlaoise but there was still six in it at the break, 1-7 to 0-4.

“Portlaoise changed things around a bit at the break and duly upped it considerably, led by the likes of Kieran Lillis and Brian Glynn whose influence grew as the game went on,” went our report at the time.

“Ciaran McEvoy fisted a point and then McCormack drilled home a penalty in the 35th minute after Ricky Maher was fouled.

“McCormack added a point almost instantly and suddenly all the momentum was back with Portlaoise.”

By the 42nd minute, with McCormack’s influence growing steadily, the sides were level. He then put them one up before Ricky Maher doubled the lead.

“But Port finally shook themselves,” we wrote at the time, “and Colm Murphy pointed twice in a minute to have them level by the 53rd minute.

“Then he put them ahead again with his sixth point of the game but the lead was short-lived as Portlaoise worked it down the field to McCormack and he ballooned one over again.

“The winner came eight minutes into added on time when Craig Rogers picked out Dillon with a lovely pass.”

In all there was 13 minutes of injury time played in the second half (after five had been signalled) though it was pock-marked with all sorts of skirmishes and there were four men sent off in total – three for Port and one for Portlaoise.

Portarlington were incensed afterwards with the additional time played and after such a massive clash a midweek replay would have been warmly welcomed by the neutrals in attendance.

“They’re not in a 13th final in a row and going for a 12th title in 13 seasons for no reason,” said one of the items in our Talking Points on the game.

“Portlaoise showed why they’re contstantly the team to beat in Laois in the second-half of Sunday’s Laois SFC semi-final against an up and coming Portarlington side.

“They got off to a dreadful start, trailed by six points at half time, were down as the clock ticked towards injury time – but scored the last three points of the game to win by two.

“It was cruel on a young Portarlington side that had played so well but the way Portlaoise upped their performance in the second half and calmly eat into the lead was just so impressive.

“The penalty call shortly after the break may have been slightly on the soft side but Brian McCormack was exceptional and on a dog of day the likes of Kieran Lillis, Ciaran McEvoy and Brian Glynn really stood up.

“Portlaoise may be showing signs that they’re not the power they once were but they knew how to dig out this result.”

“Last week in the buildup to this game we wondered which Portarlington side would show up,” we wrote afterwards.

“The one that scored 5-15 and blew Graiguecullen away in the quarter-final, or the one that huffed and puffed a bit too much in the earlier rounds?

“In the end they did both. In the first half they played with all the confidence of a side that knew they had it in them to take the scalp of Portlaoise. Then, when things went against them in the second half, their inexperience came to the fore.

“Colm Murphy was their only scorer in the second half, they messed up too many attacks and too often they seemed to lose their focus.

“The 13 minutes of injury time were chaotic and there was bits of scraps all over the place – but Portarlington finished with 12 men.

“This was undoubtedly a missed opportunity and it’ll be hard for them to stomach this result now.

“But they have time on their side and if they build on this year’s run, they are the best placed club in Laois to stop Portlaoise’s dominance.”

Portlaoise went on and beat Killeshin by a point in the final before losing in the Leinster club to Eire Og of Carlow. Of the Portlaoise players that featured that day, seven of them – Michael Nolan, Brian Mulligan, David Seale, Colin Finn, Brian Glynn, Brian McCormack and Craig Rogers – are no longer involved.

Portarlington licked their wounds, reshaped their team slightly, and came back a better side. While Covid paused everything for all of us, Portarlington haven’t lost a championship match since, have won their first senior title in 19 seasons and are back in another final again.

Among their championship wins in 2020 was a Round 2 victory over Portlaoise; they also beat them in this year’s Division 1 league final. For what it’s worth, Portlaoise did win the opening round league game between the two, a day when they scored four goals and won by 13 points in McCann Park.

The tide has turned somewhat but Portlaoise haven’t gone away.

That 2019 semi-final was the start of a modern rivalry. On Sunday we should have another fascinating chapter.