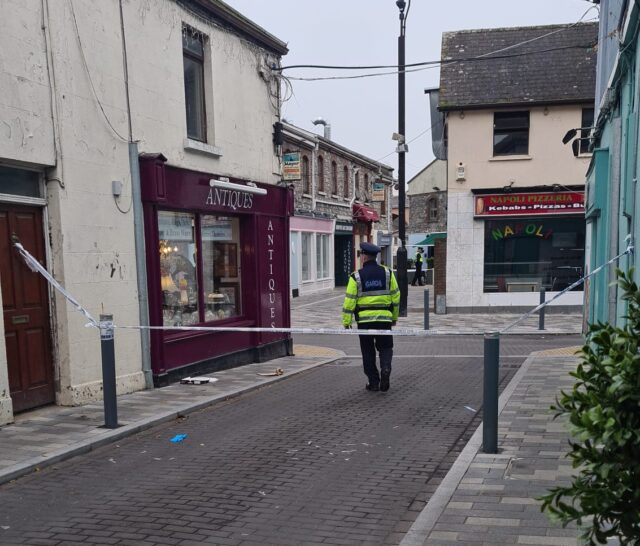 The victim of a stabbing incident that happened in the early hours of Saturday morning in Portlaoise is in a ‘stable but serious condition’.

That is according to Gardai who have released a statement appealing for witnesses to the event to come forward.

For much of yesterday, parts of Portlaoise’s Main Street was cordoned off – from Market Square at the top of the town to Bull Lane and the entrance to Hynds Square.

Gardai said: “Gardaí in Portlaoise are investigating an assault which occurred on Main Street, Portlaoise in the early hours of this morning, Saturday November 13.

“A male, aged in his 40s, was seriously injured during the incident.

“He was taken to Midland Regional Hospital in Portlaoise and was later transferred to St. James’ Hospital, Dublin. His condition is described as serious but stable.

“Gardaí are appealing for any witnesses to this incident to come forward.

“Gardaí are particularly appealing to any persons that were near the junction of Main Street and Church Street in Portlaoise between 3am and 3.30am this morning, Saturday November 13, to make contact with them.

Meanwhile, video footage of the aftermath of the stabbing incident has since surfaced online.

Gardai are appealing to the public not to share this video.

They said: “Investigating Gardaí are aware of video footage of the incident and the aftermath currently circulating online.

“An Garda Síochána are requesting that people do not share this material.”