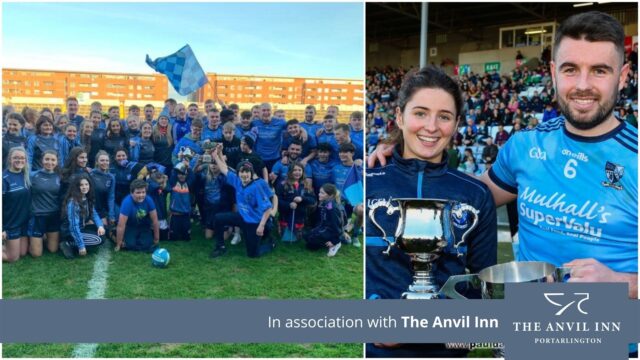 It was a remarkable Sunday for one Laois family as two of them captained their teams to championship glory.

Clodagh and Ruairi Dunne led their sides to triumph within a couple of hours of each other.

While her brother Ruairi did the same with Ballyroan-Abbey in the Junior A final against Barrowhouse.

The pair have great football heritage as their dad Pat was one of the stars of Laois’s league-winning team from 1986.

Sunday began for the Dunne family with a trip to McCann Park for 11am as the Ballyroan ladies took on Graiguecullen.

History would be made as they defeated Graigue to reach the Senior ranks for the first time in their 32-year existence.

Captain Dunne, Isabelle McWey and Andrea Moran were particularly dominant while Kate Whelan and Faye McEvoy were the stars of the show.

McEvoy, who is still U-16, drove the team forward from midfield and finished with four points from play.

While Kate Whelan top scored on the day with 1-5 and was a constant threat.

In her winning speech after the game, Clodagh wished the lads all the best and then they quickly headed off to O’Moore Park to support them in the Junior final.

And Ballyroan-Abbey would be crowned champions for the first time since 1998 following a dramatic extra time win over Barrowhouse.

There had been only one minute signalled but there was still time for one last attack and Ballyroan patiently held possession to set up Brennan – a half time sub – for his fourth point.

That was the last kick of the game and with Barrowhouse fading fast, Ballyroan were dominant in extra time, adding a further 1-5 without reply to run out comfortable winners in the end.

Both teams then came together for a picture at full time to celebrate what was an incredible achievement.

SEE ALSO – In Pictures: Incredible day for Ballyroan-Abbey as they triumph on the double