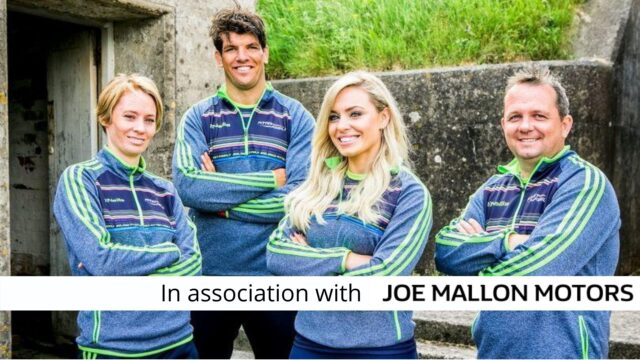 There’s scarcely a programme on Irish TV that engages as wide an audience as Ireland’s Fittest Family and the coaches that anchor the show have become as familiar in that role as they were previously in their brilliant sporting careers.

Anna Geary was recently a guest on the LaoisToday Talking Sport Podcast where she talked widely about the experience in being involved with the programme.

From doing the challenges herself to how it’s portrayed on TV, she gave a great insight into what it’s like behind the scenes.

But it was a question in our quick-fire round on whether she preferred Davy Fitzgerald or Donncha O’Callaghan that drew a great response.

“That’s a desperate question,” she laughed. “It’s like choosing between your kids!

“It depends. I love both of them. They’re great craic and even our WhatsApp group, it’s always going.

“Donncha is brilliant to slag you. You’d want to have a thick skin with him. He’s a laugh a minute. He’s a really energetic guy, really positive but he would absolutely split you in half with some of the things he would say. He has no shame.

“And then Davy is one of these characters that I am absolutely mad about. He would go to to the ends of the earth for you.

“I think sometimes people love to hate him, people love to say things. But the vast, vast majority of the time, people who are saying things don’t have a clue who he is or what he’s about.

“He has so much goodness in him and does so much good behind the scenes, whether it’s for young kids or people who might be suffering in some way.

“He’s so good to give of his time to those people. He would genuinely be someone – as would Donncha to be honest – if I had a problem or had something I’d to bounce off, I’d go to either of the two of them.”

When pressed, she had to opt for Fitzgerald though.

“But we ended up being great pals but it’s we’re both kind of similar in our coaching styles. I won’t say we like to roar and shout – but strongly encourage and often we both lose our voice.

As well as that you can also watch the interview on YouTube.