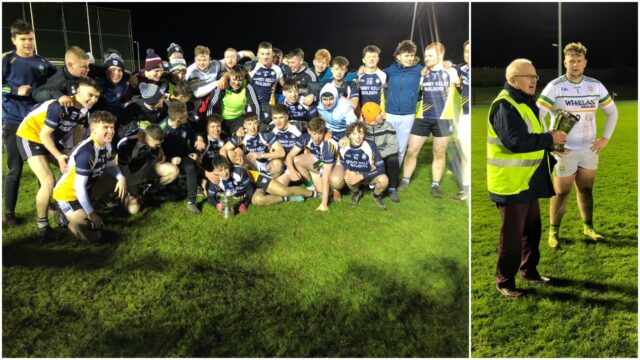 Colin Dunne’s point in injury time was the difference as Na Fianna Og defeated The Heath in the U-20 ‘B’ championship final.

In baltic conditions in Stradbally, the two teams engaged in a ding dong battle that swung one way and then the other.

It looked like we were headed for extra time when the excellent Conor Booth levelled the game with 20 seconds of normal time to play.

But Dunne, who will be U-20 for two more years and finished with 1-8, won it in the second minute of injury time.

The Heath played against the wind in the first half but started really well.

Booth slotted two frees and and excellent point off his left from play while he then set up Tom Reddy but his fisted effort just went over.

Colin Dunne was Na Fianna Og’s only scorer in the opening quarter as his points left them 0-4 to 0-3 behind at the first water break.

Booth budged The Heath two ahead when play resumed before it turned Na Fianna Og’s way.

Jonah Kelly and Lee Day tied the match before a mistake at the back allowed Colin Dunne space and he smashed a shot into the corner of the net.

The Heath had the breeze for the second half and made a good start with Booth adding two more frees.

Mark Phelan then came up from wing back and beat Matt Kelly with a low shot to give The Heath the lead once more – 1-7 to 1-6 after 37 minutes.

But Na Fianna Og never panicked. Colin Dunne fired over a point and then set up Lee Day who smashed in a low shot.

The Heath keeper Michael Harrison then kept his side in it with a fine save from sub Alex Kenny but they trailed 2-7 to 1-7 at the second water break.

The sides swapped points when play resumed and then another Colin Dunne score left four in it.

But the gap was back to two when Matt Kelly pulled off a great save to thwart William Conroy but Tom Reddy blasted over the rebound.

From the resulting kick out, Aaron Thornton won it and pumped a ball into Booth who won it, turned his man, and slipped a shot into the corner of the net.

He then levelled the game with 20 seconds of normal time to play before Colin Dunne won it.

Lee Day was the architect as his run drew several defenders which left space for Dunne to receive the pass and score.

The Heath went in search of the equaliser but time ran out and Na Fianna Og were the champions.