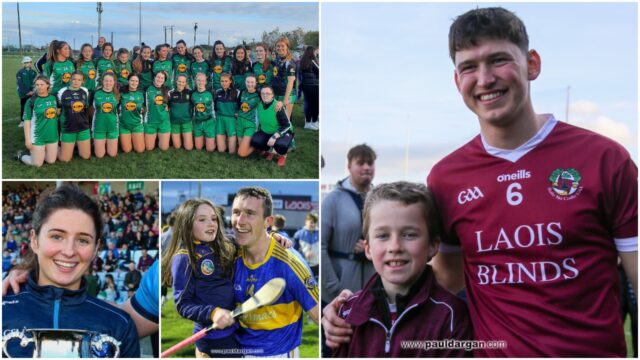 It is another extremely busy Saturday of GAA ahead with five games down for decision involving Laois teams.

It is all about provincial games now with hurling, camogie and ladies football matches ahead.

The first Laois team in action are Ballinakill and they continue their Leinster campaign in Abbeyleix.

1pm is the throw in for their game against Kilkenny champions Glenmore in this quarter final clash.

Kilkenny sides have won every Leinster championship at this grade since 2012 and with Cha Dwyer out injured, Ballinakill will be up against it.

There are three games then that all throw in at 1.30pm. One of those is in Laois and the other two are outside the county.

It is home advantage for Ballyroan as they begin their Ladies IFC campaign against St Sylvester’s of Dublin.

Mark Delaney’s charges were emphatic winners in Laois a few weeks ago and while this will be a stern test, they will go into the game with no fear.

At the same time, Ballyfin are off to Tinahely to take on the Wicklow champions in the Junior Ladies quarter final.

After a big win over St Anne’s of Carlow, Ken Farrell’s side will be hoping they have enough to get past what is Tinahely’s second string.

While the final 1.30pm throw in sees O’Moore’s head to Dublin to face Erin’s Isle in the Leinster Camogie championship.

This Intermediate clash was not played last year but the Camogie Association have decided to play the 2020 championship first – hence as Laois’s winners last year, Dermot McGill’s side are thrust into provincial action.

The final game on a busy day throws in at 5.30pm in O’Moore Park – where the RTE cameras will be present.

While Clough-Ballacolla claimed glory three weeks ago, it is more than two months since their opponents did likewise in Wexford.

Ballacolla should have Mark Hennessy and Eoin Doyle available after they missed the Borris-Kilcotton win through illness and suspension respectively.

Rapparees stand out player is their captain Kevin Foley and they ended a 43-year wait for Wexford glory in September.

An exciting day lies ahead of us and we will bring you reports of all the games as they happen.