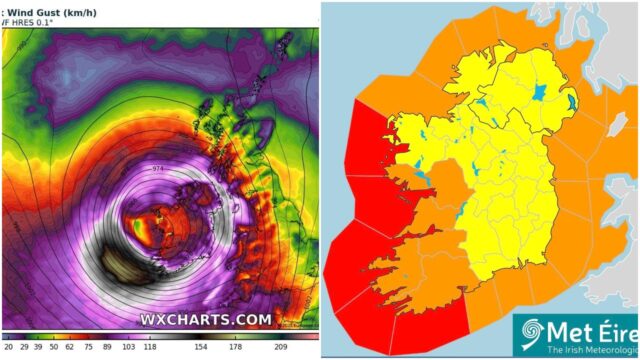 Ireland is set to be battered by an Atlantic storm from Tuesday as Storm Barra is set to reach our shores.

As is typical with Atlantic storms, the West of the country will bare the brunt of the bad weather.

A Status Red warning from Mizen Head to Slyne Head will come into effect at 6am on Tuesday morning.

A Status Orange warning will be in place from 6am on Tuesday morning until 6am on Wednesday morning for Clare, Cork, Kerry, Limerick and Galway.

Here, southerly winds, later becoming to northwesterly, will reach mean speeds of 65 to 80 km/hr with severe or damaging gusts of up to 130 Km/hr, possibly higher in coastal areas.

Disruption to power and travel are likely. High waves, high tides, heavy rain and storm surge will lead to wave overtopping and a significant possibility of coastal flooding.

While a Status Yellow warning will be in place for the rest of the country, including Laois, for the same period.

Winds and heavy rain are set to batter us throughout Tuesday and some of Wednesday too.

Alan O’Reilly from Carlow Weather says it’s going to be quite serious.

Mr O’Reilly told Newstalk: “Unfortunately it’s a bit of a perfect storm in terms of the timing, spring tides, strongest winds during the middle of the day, heavy rain as well.

“Those on the west and south west coast really need to avoid coastal areas.