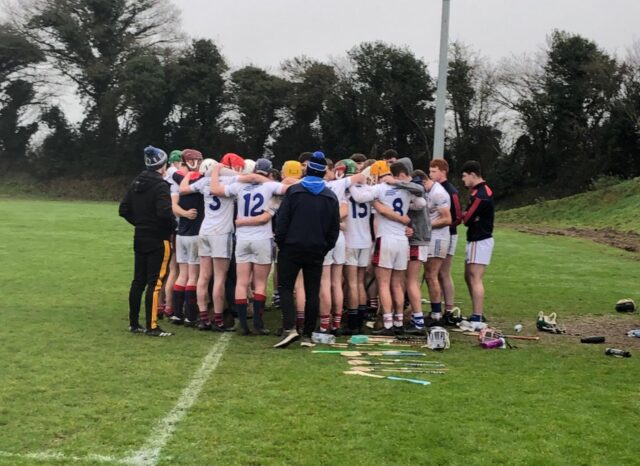 In a competitive game in the Centre of Excellence, where things boiled over on a couple of occasions, Mountrath produced a fine second half display to win by 11 points.

Keeper Brochan O’Reilly was one of their main men as he saved a penalty in the first half and made a number of other top class saves over the hour too.

While in attack, sharpshooter Ben Deegan finished with 2-5 while Jer Quinlan supplied a goal in either half – all of these coming at crucial times.

Mountrath started the game really well as Josh O’Brien-Holmes fired over a point and then Eoghan Cuddy delivered a long ball into Jer Quinlan who smashed home the first of his goals.

Evan Kealy got Borris underway but Conor Doran and Ben Deegan responded with points to keep the Laois lads ahead.

Borris then had a great chance for a goal but Sam Byrne was denied twice at point blank range by O’Reilly.

Joe Dundon ended the quarter with a point but Mountrath still led 1-3 to 0-2 at the first water break.

Diego Dunne was beginning to cause problems before the quarter ended and his direct running drew a foul which resulted in a penalty when play resumed.

Evan Kealy took it but keeper O’Reilly was equal to his effort and batted the ball away.

However, he was powerless to prevent a Borris goal after 21 minutes. Dunne again was the architect and this time he passed to Joe Dundon who rattled the net.

Sam Byrne added a point soon after and we headed for half time with the scores level at 1-3 apiece.

The same player scored again when the new half started to give the Carlow men the lead for the first time. Byrne then almost had a goal but O’Reilly once again made a stunning save.

Mountrath desperately needed a spark and they got it in the 33rd minute when Ben Deegan’s long range effort caused chaos and ended up in the net.

And the ball was in the net again a minute later when Deegan picked out Quinlan with a pinpoint pass and he cut in from the angle before scoring.

Evan Kealy replied for Borris but Deegan scored a free and two points from play to leave it 3-6 to 1-5 at the second water break.

Deegan then ended any chance of a Borris comeback when play restarted as his shot from long range was fumbled into the net by the unfortunate Borris keeper.

Substitute Jack Breen and a free from Deegan then made the game safe in the time that remained.

Mountrath will now face either Wexford CBS or Maynooth SLS in the quarter final which is scheduled for January 18.