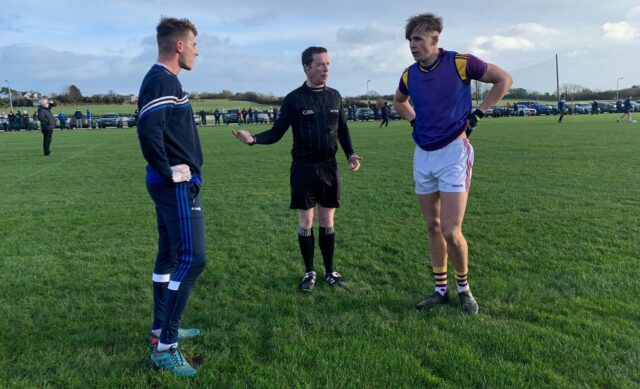 The O’Byrne Cup game in January on a club grounds in Wexford is never going to live long in the memory – and Laois will be keen to file this one away as soon as possible.

A new-look Laois team, which saw 11 players feature who have never played championship football, were beaten by 15 points by Wexford in Shelmaliers.

They conceded three goals in the opening quarter and were chasing a losing battle from there as the first game of the Billy Sheehan era got off to a losing start.

But it was a first day out and coming on the back of a disappointing 2021 season, they’ll be hoping that it’s a starting point for a new dawn.

Ben Brosnan and Tom Byrne, who got three goals for Wexford, led the way for the home side as they led 3-3 to 0-3 at the first water break and then by 3-8 to 0-6 at half time.

For Laois there were some flickering signs of encouragement. Mark Barry looked very sharp in the full-forward line and linked up well with Evan O’Carroll and Sean Moore.

Barry kicked three nice points from play in the first half and Moore got a point that had a sniff of a goal chance about it.

James Finn and Brian Daly also landed fine scores from distance in the opening half.

Laois made nine changes at half time though never looked like eating into the lead.

Brosnan and Byrne hit the net to stretch the lead to 18 points at one stage though a couple of Gary Walsh frees and a fabulous point from distance from his Ballylinan club mate Cathal Fennessy meant Laois added to the scoreboard without mounting a comeback.

Byrne completed his hat-trick late on and Ross Munnelly, in his 20th campaign for Laois, hit two in response, one each from play and a free.

To use soccer parlance, Laois will look to take the learnings from here and move on.

They play Meath in the next round of this competition on Wednesday night in Stradbally and then Wicklow in Crettyard next Saturday.

Their National League Division 3 campaign begins away to Louth on Sunday, January 30.