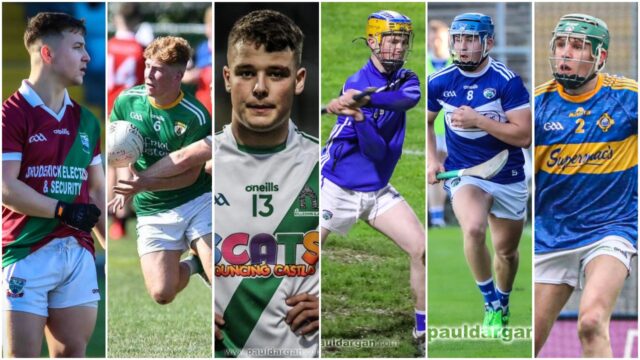 After a one year Covid-19 enforced absence, the most prestigious college football and hurling competitions are set to get underway this week.

The Sigerson Cup will commence tonight with the Fitzgibbon Cup beginning a week later.

Across the two competitions, a total of 19 Laois players are set to be in action.

The football gets underway this evening with five Laois based players potentially in action.

Four of these are with IT Carlow who are managed by Portlaoise’s Pat Critchley and will host Letterkenny Institute of Technology.

Killeshin trio Killian Roche, Evan Lowry and David Aston are all in the IT Carlow squad alongside Courtwood’s Matthew Byron.

They made the final of the competition when it was last played back in 2020.

On the same night, Mark Barry’s DCU, who recently won the league, will take on Maynooth with O’Dempsey’s man hoping to continue his good form from the weekend with Laois.

On Wednesday, Laois Senior Footballer of the Year Jake Foster will be in action when Munster Technological University in Tralee face holders UCD.

His involvement there means that his potential debut with Laois will remain on hold as the county team are due to face Meath in the O’Byrne Cup on the same night.

The seventh Laois player set to be involved is Killeshin’s Shane Bolger who has been named on the Queens University Belfast squad.

They received a bye into the Winners Section of Round 2 where they will play the winners of NUIG and Ulster University next weekend.

The Sigerson is being run on a knock-out basis with a backdoor – the same format as is used in the Laois senior football championship.

Meanwhile, a total of 12 hurlers are due to play with their respective colleges when the Fitzgibbon Cup commences on Wednesday January 19.

Like with the football, the majority are with IT Carlow where five Laois lads will by vying for positions.

IT Carlow are in Group B and begin away to WIT before facing Maynooth and DCU in the following weeks.

When they play Maynooth in Round 2, there could be eight Laois men on the field as the Kildare college have three representatives.

The Harps duo Cathal Phelan and Daniel Comerford plus Clough-Ballacolla’s Diarmaid Conway are all with Maynooth.

Group D is very Laois-heavy with two of the three teams involved having Laois representation.

Castletown’s Conor Walsh is with University of Limerick and he could clash with two Laois men next week when they take on TUS Midwest.

Rathdowney-Errill’s Eric Killeen, who appeared for Laois against Wexford, is with them while so too is Rosenallis’s Conor Cosgrove.

Meanwhile, there is one Laois player in Group A as Clough-Ballacolla goalkeeper Cathal Dunne is with UCD.

They play NUIG first before facing Mary I and UCC in what looks like a very tough group.

SEE ALSO – In Pictures: All smiles as Laois mam and daughter among graduates in IT Carlow