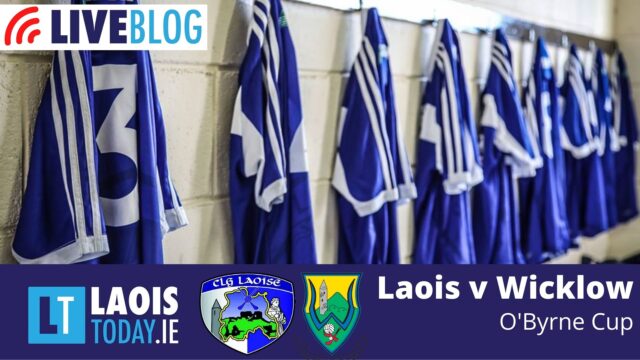 The Laois footballers are in action again this afternoon as they take on Wicklow in the O’Byrne Cup in Crettyard.

Billy Sheehan’s side shows 11 changes from the team that started against Meath on Wednesday night.

Trevor Collins at full-back, Alex Mohan at corner-back, midfielder Kieran Lillis and centre-forward Paul Kingston are the only three to be given a starting spot again as manager Billy Sheehan uses the opportunity to give game time to his full panel.

It’s Laois’s third game in a week and Collins – who is in a new role at full-back – is the only player named to start all three games.

There are first appearances of the year for Courtwood’s Matthew Byron in goals, Alan Farrell at centre-back and Danny O’Reilly and Eoin Lowry in attack.

After losing their first game of the year to Wexford last Saturday, Laois responded well by beating Meath in Stradbally on Wednesday.

Should Laois beat Wicklow (who beat Wexford on Wednesday night) they will have a chance of going through to the semi-final of the pre-season competition.

A Laois win and a Meath win over Wexford in Navan would send Laois through as group winners.

Were it to transpire that way they would be in semi-final action on Wednesday night against Kildare.

Incidentally Saturday’s game will be the first of three games between Laois and Wicklow this year as the sides are also set to meet in Division 3 of the National League in Aughrim on Sunday, March 13, and in the opening round of the Leinster championship on Sunday, April 24.

The Laois team named to start is as follows.

You can follow all of the action in our Live Blog below with the game throwing in at 2pm.