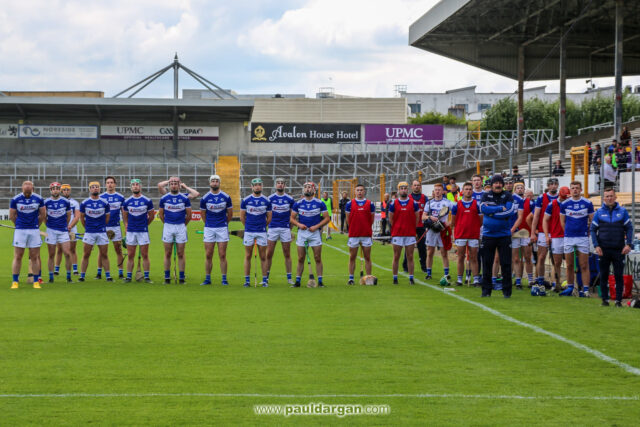 The Laois hurler’s 2022 Walsh Cup campaign is over after they were beaten by Kilkenny in Callan this afternoon.

After a promising opening 45 minutes, Laois faded in the final stages to lose out by six points in the end.

They led by three points at that point in the game and their lead should’ve been much greater as they hit 11 wides in the first half and also gifted Kilkenny a goal.

This was a new-look Kilkenny side with not one of the 21 players who featured in their 2021 All-Ireland semi final loss to Cork on show today.

And it was Laois who started the better with Ross King landing a brace and the lively Ben Conroy also scoring.

Kilkenny opened their account through Shane Walsh and were then gifted a goal after 12 minutes when Liam O’Connell’s pass in defence was intercepted with Emmet Lundy racing clear to rattle the net.

Laois regained their composure though with King and John Lennon pointing to level it at 0-5 to 1-2 at the first water break.

Laois got the first three scores when play resumed once again as King fired over two more while Seamus Fitzpatrick was desperately unlucky to see a shot for goal just whistle over the bar.

Podge Delaney also pointed as King added another four to his tally by half time.

But Kilkenny kept pace with Laois as Walsh, Colm Prenderville, Niall Brennan, David Blanchfield and Shane Murphy all raised white flags to leave them behind by one at the break – 0-13 to 1-9.

Laois continued on top for the first ten minutes of the second half with keeper Enda Rowland landing two long range frees and the impressive Jack Kelly slotting a brace.

Points from Paddy Purcell and Stephen Bergin left them three ahead after 47 minutes but the game began to unravel for them after that.

Kilkenny got the next five scores with subs Stephen Donnelly and Robbie Buckley causing the visitors problems and resulting in them taking the lead for the first time – 1-19 to 0-20 at the second water break.

Kilkenny continued to up their scoring rate when plat resumed and Laois had no answer, despite Ross King, Bergin and Kelly leading the charge.

The final five minutes consisted of Laois trying to carve out goal opportunities and when they did, either keeper Liam Dunphy or a Kilkenny defender managed to get in the way.

So it was a second defeat for Laois and they now face Tipperary in the first round of the National League at the start of February.