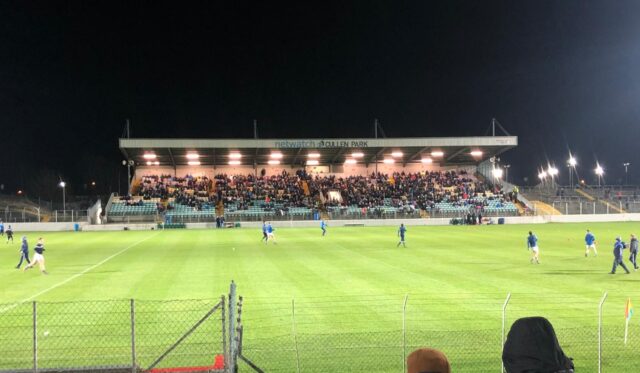 There was history and serious drama last night as the Laois senior footballers defeated Kildare in the O’Byrne Cup semi final.

After the sides could not be split in normal time, a penalty shoot out was required.

There was some confusion initially as the stadium announcer called for extra time but that was soon rectified.

In the first five penalties, Brian Daly had the chance to win it but saw his effort saved by Kildare keeper Mark Donnellan.

Then it was Kildare’s turn to win in it sudden death but Paddy Hyland struck the post.

Cormac Murphy, who missed his first, rattled in his second meaning that Paddy Woodgate had to score to keep the shoot out going.

But Laois keeper Matthew Byron guessed right and Laois were the winners.

Laois’s O’Byrne Cup campaign rolls on as they face into a fifth game in just 14 days.

Dublin will be their opponents on Saturday back in Dr Cullen Park for a 3pm throw in.

Eight days after that, their Division 3 league campaign begins away to Louth in Ardee.

Check it out below and if the video fails to load, you can head over to our Facebook page directly.