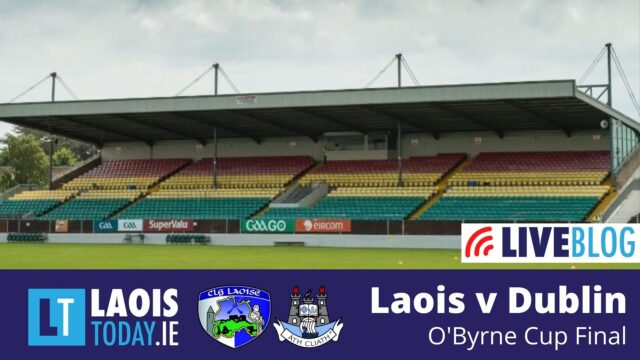 The Laois footballers play their fifth O’Byrne Cup game in 14 days today when they take on Dublin in the final of the pre-season competition in Dr Cullen Park in Carlow.

After losing to Wexford by a whopping 15 points, 6-10 to 0-13, in the opening round two weeks ago, Laois have responded well.

They did this with a 1-12 to 0-8 win over Meath, a 2-14 to 1-11 win over Wicklow and a 6-5 sudden death penalty shootout success over Kildare after the sides had finished level after 70 minutes.

It’s a first O’Byrne Cup final appearance since 2007, when Dublin got the better of Laois after extra time – and Laois are seeking a first success in the competition since they beat Westmeath in 2005.

Laois manager Billy Sheehan has made two changes to the team that started against Kildare – with Danny Bolger coming in for Matthew Byron in goals and Mark Barry starting instead of Ross Munnelly in the full-forward line.

Dublin have reached this final thanks to wins over Offaly, Louth and Longford have used 39 players (Laois have used 34) as they prepare for a first season where they’re not the defending All Ireland champions for the first time since 2015.

While Dublin have lost a number of players to retirement in the off season, the only established names not yet to feature are Evan Comerford, Mick Fitzsimons, Jonny Cooper, Dean Rock and Con O’Callaghan.

Among their new players to keep an eye on are recent U-20s like Lee Gannon and Ciaran Archer.

While Peadar O Cofaigh Byrne is a highly-rated midfielder who has been on the fringes of the starting team in recent years.

After today’s game, Laois are in action again next Sunday against Louth in Division 3 of the National League while Dublin play Armagh on Saturday in Division 1.

Throw in today is at 3pm and we will bring you all the action as it happens.

You can follow all of the action on our Live Blog below: