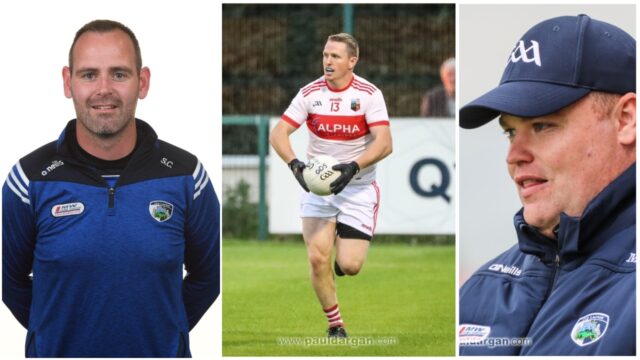 Two former Laois senior selectors and a former minor manager are among the new men appointed to lead football clubs in Laois this year.

Paul Lawlor, a selector with the Laois footballers under Mike Quirke in 2021, is now the manager of Emo.

He replaces John Strong and will not be unfamiliar to this as he has acted as player-manager in the past, guiding the club to intermediate success in 2017 and to a senior quarter-final appearance in 2018.

Meanwhile, former Laois minor manager Mark Bates is now over Clonaslee-St Manman’s where he will be assisted by Darren Hogan.

He managed Laois to a Leinster minor semi final in 2020 and a quarter final in 2021 and was previously involved with the Thomas Davis side who reached the Dublin final in 2019.

It is something of a swapping of roles as Bates replaces Conor Gorman who has replaced him as Laois minor boss for this year.

He served as a selector with Laois in 2019 under John Sugrue and will take over from Shane Courtney in The Heath this year as they look to immediately return to the top grade following relegation in 2021.

Stradbally have also appointed a new manager following the departure of Greg Ramsbottom.

Former Portarlington manager Brian Lonergan, who also served as a selector with the Kildare minors in the past, is their new boss.

The Monasterevin native will be assisted by former players Gary Kavanagh and John Larkin as selectors.

While the final new manager has been appointed by Rosenallis as Jimmy Stewart has replaced Paddy Dunne.

The Clara man was a coach under Dunne last season and has previously been involved with the Offaly U-21s and seniors.

After that, the majority of the remaining senior teams have reappointed their managers for 2022.

County champions Portarlington will be hoping Martin Murphy can lead them to three in a row while defeated semi finalists Ballyroan-Abbey are once again under Padraig Clancy.

While Eddie Kinsella will once again double up his role with the Laois U-20s as he takes Courtwood and Park-Ratheniska have held on to back-to-back Junior and Intermediate winning manager Kieran Kelly.

Two clubs, Ballylinan and Portlaoise, are yet to confirm their management teams for the coming season.

The club season is set to get underway with the leagues in mid-March while the championship should begin in late July or early August.