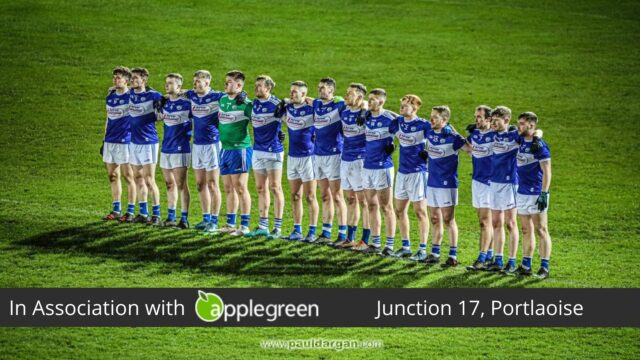 Westmeath’s recent good record against Laois in the National League continued in O’Moore Park this afternoon as they did enough to come out on top in a hard-fought encounter in difficult conditions.

They’ve now beaten Laois in their last six league meetings as they finally stretched clear in the final quarter.

For the first time in almost two years the Laois footballers played a home game in front crowd.

But this was one for the purists. On a bitterly cold day with the wind swirling towards the apartment side of the Abbeyleix end, the first half was a real war of attrition.

Laois played with the breeze in the opening half but for long spells Westmeath dominated possession.

Yet neither side created much of note in the first 20 minutes.

Goalkeeper Danny Bolger banged over a long-range free from about 60 yards in the fifth minute but Westmeath took the lead when Luke Loughlin fisted a John Heslin effort to the net four minutes later.

Chances were few and far between at either end but Laois did work a brilliant move that ended with Mark Barry pointing and they were soon level when the impressive Eoin Lowry got his first point from play.

A John Heslin free and a Ronan O’Toole effort from play put Westmeath two up again – but two from Lowry and another long-range free from Bolger sent Laois in at half time leading by 0-6 to 1-2.

Conor McCormack levelled things up early in the second half and the sides then went score for score: Gary Walsh with two frees and one from play for Laois and Heslin, O’Toole and David Lynch all on target for the visitors.

But Westmeath then began to get on top in the final quarter and three quick points had them three in front.

The first could well have been a goal but Bolger did well to tip over Luke Loughlin’s effort and then Alex Gardiner and Heslin (free) had them 1-9 to 0-9 clear.

Gary Walsh pulled back a free after Paddy O’Sullivan was fouled but it was instantly cancelled out by a second from Gardiner.

A Gardiner mark pushed the lead to four late on and though Ross Munnelly responded, Westmeath made sure of the win when sub Kieran Martin powered through for a goal.