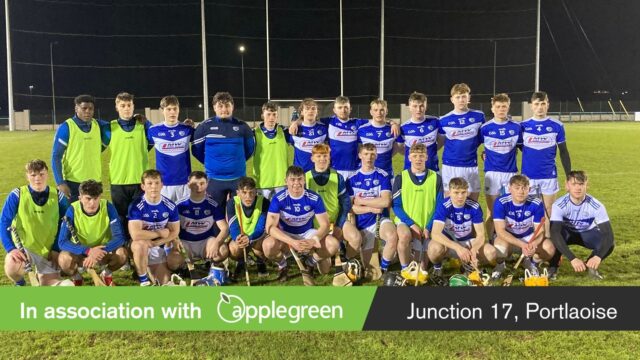 Eight points from Podge Brennan and two late goals from sub Colin Byrne helped the Laois U-20 hurlers to an 11-point win over Kildare in the Centre of Excellence in Portlaoise this evening and a place in the pre-season Leinster League final on St Patrick’s Day.

In a decent contest in cold conditions, Laois led from start to finish and although Kildare had the gap back to two points with five minutes remaining, Abbeyleix’s Colin Byrne struck for two goals in the space of a minute to make the game safe for Laois.

An impressive performance from Clough-Ballacolla’s Padraig Brennan, which saw him shoot seven points, three of them from play, from the half-back line was also a feature of Laois’s performance.

Having seen off Carlow last Saturday week, Laois will now play either Offaly or Westmeath in the final of this competition on March 17.

Having had a good run in last year’s Leinster U-20 championship and run Kilkenny close, Laois have a decent crop of players at this grade.

Manager Ollie Hally made six changes to the side from the team that beat Carlow last week as he ran the rule over his panel.

They hit three early points here – from Adam Kirwan, Dan Delaney and Cillian Dunne – to race into an early lead and they never really looked like losing.

By half time they were 0-13 to 0-6 in front having hit the last five points of the half.

Brennan landed a couple of massive points from distance, two of them from play, while Cillian Dunne landed four, Cathal Murphy got two and Tadhg Cuddy and Noah Quinlan hit one apiece.

Fionn Maher got three points for Kildare on the restart but frees from Brennan and Dunne kept Laois at arms’ length with Tadhg Cuddy also adding a second.

Aidan O’Brien came on to score 1-1 for Kildare and they twice had the gap back to two and could even have taken the lead only for a brilliant save from Rathdowney-Errill’s Paddy Hassett on Cormac Nolan.

But Colin Byrne showed his goalscoring touch with two nice finishes in the space of a minute and Laois closed out the game by scoring 2-3 without reply.