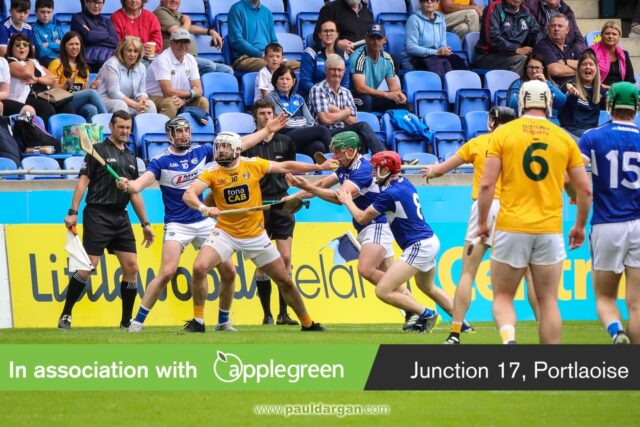 The Laois hurlers invariably seem to have huge relegation battles every year and another one will take place in O’Moore Park this afternoon, live on TG4.

Antrim are the visitors to Portlaoise for Round 4 of the National Hurling League. But it essentially amounts to a relegation semi-final.

Both teams have lost their three games to date and have no chance of reaching the semi-finals. But the winner of this game will be guaranteed Division 1 hurling again in 2023.

The loser, however, will be certain of finishing bottom of the 1B group even with a game remaining and facing a relegation decider against Offaly (more than likely) in two weeks time.

Laois and Antrim only met last July in a championship relegation game in Parnell Park, a game where Laois produced their finest display of the season after six losses in a row and won 2-27 to 2-21.

Coming after Antrim had beaten Clare and Laois and draw with Wexford in the league, it was a considerable turnaround from Laois at the time.

They later defeated Westmeath in the league relegation playoff.

Laois have been in Division 1 since 2014 and despite huge losses to Waterford and Kilkenny in their last two outings, it’s against the likes of Antrim that their season is usually defined.

Here we look at some of the key points ahead of the game.

Laois have named the same team that they named to start against Kilkenny last week, though there was a late change to that side with James Keyes replacing Willie Dunphy.

In any case, Dunphy, who had a fantastic game against Antrim last year, is included in the starting team instead of Keyes.

Antim have named the same 15 that started against Waterford in Belfast last Sunday. They almost snatched a draw with a last-minute penalty from Neil McManus deflected over the bar.

How are Antrim going?

Just as they did last year, Antrim are showing far better league form than Laois, losing to Kilkenny by just four points, Dublin by three and Waterford by two.

Though they have lost all three games, their scoring difference is only -9 compared to -54 to Laois.

It means that a draw would likely be enough for Antrim, unless Laois were to beat Dublin in their final game and Antrim lost to Tipperary.

It’s actually quite good. As well as winning last year’s championship game, Laois also came out on top in the 2019 Joe McDonagh Cup and three times in 2018 (twice in Antrim) – in the McDonagh Cup, the National League relegation playoff and in the regular National League.

Laois have won the last five meetings between the counties going back to the 2015 Leinster championship round robin game which Antrim won by a point.

Despite home advantage, Laois are outsiders at 13/8 with Antrim at 4/6 and the draw priced at 8/1.

Shane Hynes from Galway is the man in the middle. A relatively new name on the intercounty scene, he hasn’t taken charge of a Laois game before.

It’s €15 in. Tickets must be pre-purchased, either in a participating SuperValu or Centra or online here. Cash is no longer being taken on the gate.

We will be providing our Live Blog as usual with updates throughout from Midlands 103. The game is also being shown live on TG4.