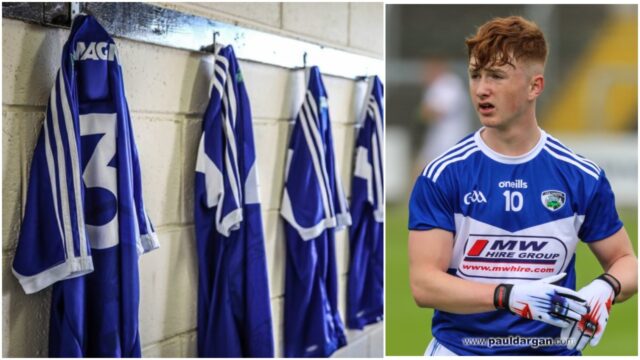 The Laois minor football team to take on Westmeath in Saturday’s Leinster championship opener has been named.

Captain Davy Costello from Emo leads the attack from centre-forward with his St Paul’s club mate, Ryan Little from Courtwood, inside him at full-forward.

Costello, Little, Corey Geoghegan (Portarlington) and Jeremy Kelly (St Joseph’s) were all part of last year’s panel that were defeated in the quarter-final by Louth.

Centre-back Darragh Loughman from Ballylinan is the vice-captain.

Hugo Emerson from Portarlington, son of former Laois great Hughie, is named in midfield where he will partner Aaron Tarpey from Kilcavan.

St Joseph’s lead the way with three representatives while Portlaoise, Portarlington, Ballylinan and Killeshin have two each. Annanough, Courtwood, Emo and Kilcavan all have one apiece.

Dual county minor Brochan O’Reilly is named in goals while full-back Tadhg Dineen from St Joseph’s was on the Heywood team that won the All Ireland Colleges ‘C’ final last week.

Laois are in a group alongside Westmeath, Dublin and Louth with the top three teams advancing to the knockout stages.

Laois are managed by Conor Gorman from Clonaslee, goalkeeper on the 2003 All Ireland-winning minor team.

Saturday’s game takes place in O’Moore Park and throw in is at 12noon.