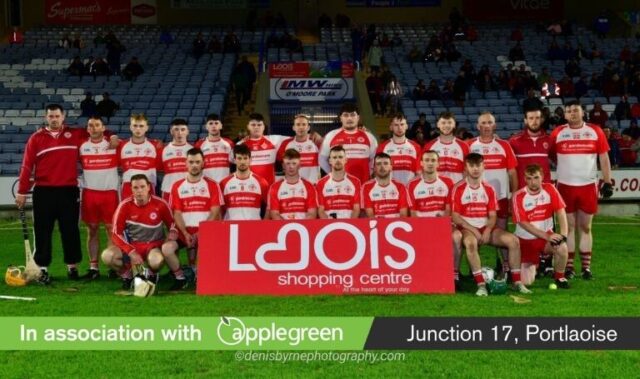 Trumera sailed through to the quarter finals of the Leinster Hurling League following a comprehensive victory at the weekend.

Kevin’s Hurling Club of Dublin visited the Laois club in Round 2 but they headed back up the motorway following a ten point defeat.

On a glorious Saturday evening which brought out a lot of Trumera’s supports, these two sides went hell for leather in the opening 10 minutes of the game.

Jamie Lewis caught a long ball on the 21 yard line and beat his marker to bury Trumera’s first goal to continue his great start to his adult career.

Shane Murphy started at full forward and scored two great goals in the first half also.

But that was as good as it got for themas Trumera scored 10 unanswered points in the second half.

Niall Sinnott was excellent in this period as he converted a number of frees and finished the match with 12 points.

Kevin’s replied with a goal but Cathal Brophy ended any chance of a comeback with Trumera’s fourth goal before the end,

Trumera’s work rate, hunger and physically showed all over the pitch which must be impressing Brendan Lowry and his two selectors.

James Kerwin and Darren McSpadden were exceptional in the back line while Connor Madden, Dylan Lalor and Shane Murphy really impressed in the forward line while Niall Sinnott was brilliant from open play and on frees.