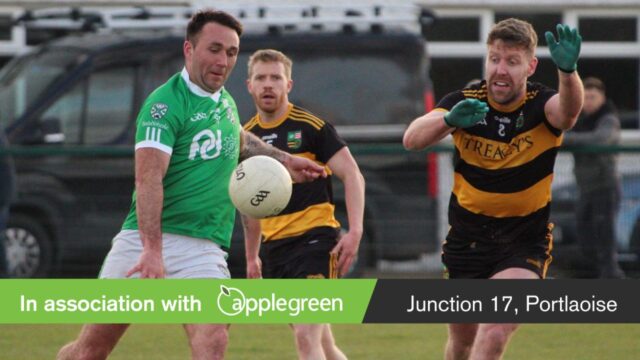 Stradbally made it three wins from three games as they ran out 10 point wins over The Heath this evening.

They began the game with three early points from Cillian Maher, Benny Lawlor and Conor Buggie.

Leon Holland got The Heath underway and they then struck for a goal when a Stradbally kick-out went wrong and James Phelan pounced to score a goal.

The visitors recovered with scores from Jody Dillon and Colm Begley before they had a goal of their own.

Jody Dillon’s free from 45 metres dropped short but it deceived Heath keeper Seamus Mulhare and ended up in the net.

Jimmy Nerney and Conor Booth hit points for The Heath but Lawlor and Begley pointed in reply to leave Stradbally 1-8 to 1-4 ahead at half time.

Stradbally picked up from where they left off when play resumed as a swift move up the left flank instigated by Conor Buggie ended with Benny Lawlor clipping the ball into the bottom corner.

The Heath were given the chance to get back into the game when Conor Booth won a penalty but Stradbally keeper Jack Larkin guessed right to deny him from the spot.

After that, The Heath’s challenge faded and all they managed were points from Phelan, Andrew Booth, Holland and sub Jake Ratcliffe.

Stradbally replied through Colm Begley, Eoin Buggie and Dillon before sub Noah Delaney teed up Cillian Maher to make it safe with a third goal.

Clonaslee-St Manman’s picked up their second win of their ACFL Division 1B campaign when they made a successful journey to Arles-Killeen.

A first-half goal from Jack Owens helped Clonaslee to a 1-3 to 0-3 lead at the break and they had four points to spare at the final whistle.

The result puts Clonaslee into third place in the table and in the crucial top four places, albeit with plenty of games yet to be decided.

Killeen remain without a win with three losses now from their opening three games, though this was their most competitive to date following heavy losses to Rosenallis and The Heath in their first two outings.

Arles-Killeen have a local derby against Ballylinan the next day out while Clonaslee are at home to The Heath.

Killeshin recovered from their heavy defeat to Ballylinan during the week to get the better of their neighbours Arles-Kilcruise and record their second win in ACFL Division 1B.

A first-half goal from Jack Dowling helped Killeshin to a 1-4 to 0-6 lead at half time and though Kilcruise fought back to go ahead in the second half, Killeshin got a string of late scores they had three points to spare at the finish.

Both sides now have a two-week break before Round 4 – when Arles-Kilcruise host Rosenallis and Killeshin travel to league leaders Stradbally.