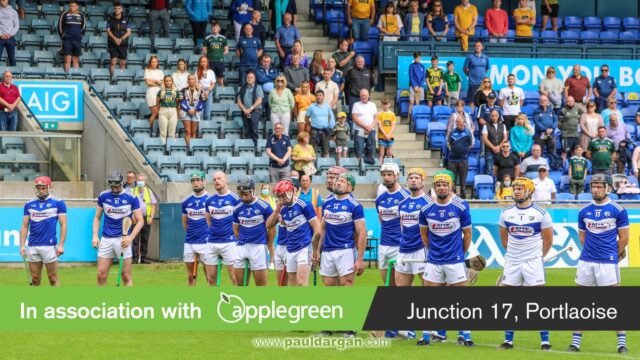 Earlier than ever before, the Leinster senior hurling championship is set to get underway this weekend.

After a shortened Covid season last year, the competition reverts back to its round robin format this year.

It means that teams face into a very busy period with five matches in the space of six weeks.

Round 1 begins on Saturday afternoon with the meeting of Wexford and Galway at 4pm.

This will be followed by Westmeath and Kilkenny at 6pm before the Laois hurlers begin away to Dublin in Parnell Park at 6.30pm.

Looking back at the Laois side that faced Antrim in their second last league game, there could be at least two changes to that team.

It is understood that Stephen ‘Picky’ Maher has sustained ankle ligament damage as is likely to miss the entire Leinster championship.

While his Clough-Ballacolla teammate Willie Dunphy is also believed to be struggling with injury – but does have an outside chance of making it.

In a further blow to the options in the forwards, Clough-Ballacolla’s Stephen Bergin and The Harps’ Ciaran Comerford, who both featured in that win over Antrim, have departed the panel.

While Slieve Bloom’s Ciaran Conroy and Clough-Ballacolla’s Cathal Dunne also left the squad during the league.

Portlaoise’s Cormac Rigney, Camross’s Liam Delaney, Rosenallis’ John Maher, Galmoy’s Ryan Murphy and Rathdowney-Errill’s Brandon McGinley are among those who have been brought into the squad.

While Clough-Ballacolla’s Ronan Broderick, who suffered a knee injury in the 2020 season, is also close to a return to full action.

Whoever finishes in the top two spots at the end of the group will contest the Leinster final with the winner of that advancing to the All-Ireland semi final.

The loser will head for the quarter finals while the team who finishes third contests the preliminary quarter final.

That team will play either the winner or runner-up from the Joe McDonagh Cup.

The fourth and fifth placed teams in Leinster will be finished for the season while the team who finishes last will be relegated to the Joe McDonagh Cup for 2023.

The only way they can avoid this is if Kerry win the Joe McDonagh Cup.

If the Kingdom do, they will face a playoff with the side who finishes bottom of the Munster group in order to determine if they compete in the province in 2023 or not.

Laois face a tough start as after this weekend, they are away again on Saturday April 23 against Kilkenny.

They then face Wexford, Galway and Westmeath in successive home matches that take us towards the end of May.

Laois’s Division 1 league campaign was difficult at times as they shipped big beatings against Waterford and Kilkenny.

But they finished it well by sealing their status against Antrim and then being competitive against Dublin in what was a dead rubber.

Both teams made several changes for that game as it was largely shadow boxing on both sides.

There will be no shadow boxing on Saturday.