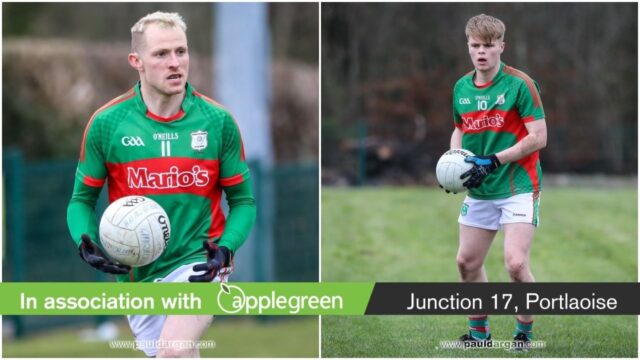 A dominant second-half performance from Graiguecullen earned them their fourth win in a row and leaves them within touching distance of a place in the top four of the Laois ACFL Division 1A.

Having lost their first game to St Joseph’s, Kevin Doogue’s side have since beaten Emo, Ballyroan-Abbey and Portlaoise and were too strong for O’Dempsey’s in Fr Maher Park this evening.

With their returning county players all available, with the exception of injured goalkeeper Danny Bolger, they fielded a strong side and though level 1-7 apiece at half time, they outscored O’Dempseys by 0-11 to 0-4.

Brian Byrne was very impressive for the home side with five points from play while Conor Kelly hit 0-7 – a mix of frees, marks and efforts from play – with last year’s minor Jack Byrne scoring 1-3, with his goal in the first half a crucial scoring, coming immediately after O’Dempsey’s had hit the net.

O’Dempsey’s played with the wind in the opening half and there was little between the sides.

The Finlay brothers – Eoin and Matthew – kicked a number of nice long-range pints from play with Jack Lennon taking his goal well midway through the half.

But Graigue immediately cancelled it out with Aaron Forbes powering through and laying off for Jack Byrne to palm to the net.

O’Dempsey’s once again came back well and Fionn Holland and Eoin Finlay put them ahead late in the half only for a Conor Kelly free and an effort from play from Mark Timmons to leave it 1-7 each at the break.

Graigue were by far the better team in the second half with Kelly, Brian and Jack Byrne, Forbes and sub Ross Hennessy all adding points.

Mark Barry, Eoin Finlay, Daithi Howlin and Jack Lennon all registered points for O’Dempsey’s but it wasn’t enough as Graigue had seven points to spare at the final whistle.

Both sides are in action again next Friday with O’Dempsey’s at home to Portlaoise and Graigue away to Courtwood.