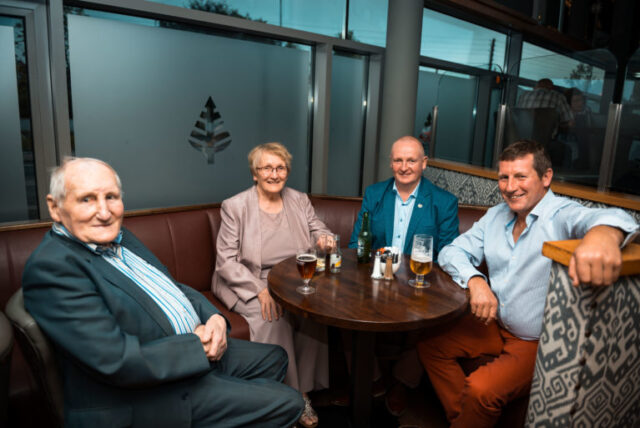 The death has occurred of Sean Ramsbottom Senior from Timahoe, the former highly-respected chairman of Laois GAA. He was in his 94th year.

Mr Ramsbottom was the county board chairman for 15 years, from 1973 to 1987, a very successful period for Laois on and off the field and his GAA involvement meant he was known and regarded the length and breadth of the country.

During his time in charge Laois won the National Football League title in 1986 as well as reaching Leinster finals in 1981 and 1985.

It was also a fine era for Laois hurling, one that saw them play in the Centenary Cup final in 1984, Leinster final in 1985 and enjoy a number of wins over the traditional hurling counties.

Off the field, he was at the helm for the major redevelopment of O’Moore Park, a huge project at the time that saw a considerable modernisation of the venue.

The Laois footballers also went on a tour of the USA in his time, visiting Chicago, New York and San Francisco and playing games against teams in all of those cities.

After stepping down as chairman in 1987, he continued for a long number of years on the county board, primarily as Central Council delegate, Laois’s voice in Croke Park.

He remained an authoritative voice at meetings right up to mid and late 2000s.

With Timahoe, Sean was also a former chairman and as a player he won an intermediate title in 1962 and was centre forward on the team beaten in the 1965 final by Graiguecullen.

For the 1969 senior success his brother Billy was the club chairman and his other brother Noel was trainer alongside the late Jim Sayers.

The Ramsbottom family tradition in terms of serving in GAA officer roles has continued through the generations with his son Willie representing Timahoe in various positions and currently as county board delegate.

His sons Willie and John were on the Timahoe team that reached the 1988 senior county final with Willie later captaining the club to intermediate success in 2000.

And the links continued to the next generation too and Sean was particularly proud in 2007 when he was in the Ard Comhairle section of Croke Park when his grandson Sean captained Laois to Leinster minor glory – the last time the county was successful in that grade.

Sean is survived by his wife Brid, sons John, Martin and Willie, daughters Margaret and Bernadette, brothers Billy and Noel and wide circles of relatives, neighbours and friends.

As a mark of respect the ACFL Division 2 game between Timahoe and St Joseph’s tomorrow evening has been postponed.