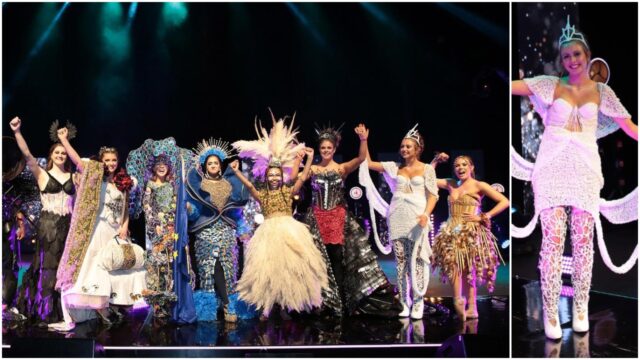 The Junk Kouture grand final took place last night and one stunning creation from Laois has made it through to the World Final.

The Junk Kouture Dublin City Final 2022 saw the finalists from post-primary schools across Ireland battle it out in the Bord Gais Energy Theater.

There were thousands of entries this year and they were whittled down to just 60 – with a creation from Scoil Chriost Ri flying the flag for Laois.

This translates to ‘tiny’ in Latin and the outfit is made up of over 100,000 tiny styrofoam beads.

The dress was inspired by the trio’s favourite designer, Zac Posen, and how he celebrates femininity and elegance in his work.

The judges were so impressed that Minima was chosen as one of nine Irish creations that will go to World Final in Abu Dhabi in the Autumn.

In an added bonus, Minima was also chosen alongside four other creations that will be shown on the Late Late Show this evening.

10 teams will travel to the final in total after a wildcard place is awarded by public vote later this month.

The competition challenges students aged 13 to 18 years from participating schools across the UK, Italy, France, Ireland, the UAE and New York to craft innovative and imaginative designs out of unwanted items and recycled materials.

This year’s Irish heat was staged in front of a sell-out, live audience for the first time since the pandemic began and was judged by Roz Purcell, Louis Walsh, fashion designer Stephen McLaughlin and singer Soulé.

The Junk Kouture Powered Dublin City Final highlights show will be broadcast on RTÉ2 and RTÉ Player on Thursday May 19 at 7pm and after the show a public vote will open immediately.

Junk Kouture judge and singer Soulé said she was “so excited” for the Irish world finalists.

“This was my first year as a Junk Kouture judge and I was more than impressed with the level of creativity, imagination, and performance that was on display last night. It was such a tough decision whittling down the 60 designs to just nine, the standard of these designs absolutely blew us all away,” she added.

Louis Walsh said every year the competition gets “bigger and better”.

“This year these designs will be making their mark on the World stage. I think we have found some really special designs here in Ireland, any of these nine could be the next big designer of the fashion industry – they are incredible,” he said.

“Well done to our winners! We are so excited for our first World Final in Abu Dhabi, bringing Junk Kouture to more young people around the globe, enriching and empowering their lives through creativity and sustainability and introducing the world to the circular engineers of the future,” he added.