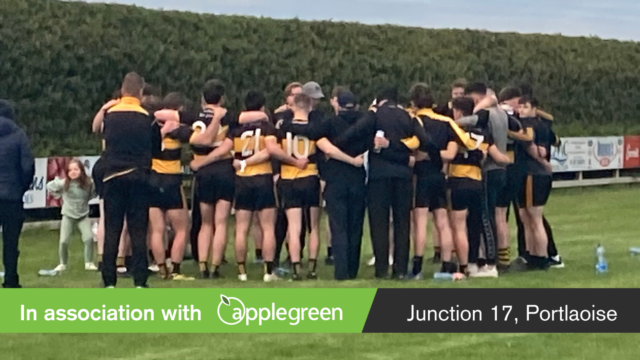 The calculators were out across the county tonight as the top four and bottom four places in Division 1B were decided.

Stradbally were already guaranteed to progress to the top four but four other teams were fighting to join them – Clonaslee-St Manman’s, The Heath, Rosenallis and Killeshin.

Killeshin started the night at -5 while Clonaslee were +10. Killeshin defeated Arles-Killeen by 13 points to leave them on +8 points difference.

When the full time whistle went in Killeen, Stradbally and Clonaslee were drawing meaning that Killeshin were out.

However, Stradbally got two late points to win and leave Clonaslee on +8 points difference – the same as Killeshin.

So now we had to revert to points scored and Killeshin scored vastly more than Clonaslee over the seven games so they take fourth place.

The top four will be Stradbally, The Heath, Rosenallis and Killeshin and they will fight it out for league glory in a new round robin.

The bottom four will be Clonaslee, Ballylinan, Arles-Killeen and Arles-Kilcruise and they will now play again in a bid to avoid relegation.

Below are reports on how all of the matches went:

A late goal from Michael Doran ultimately granted Killeshin a place in the top four of Division 1B tonight.

Arles-Killeen, who had nothing to play for, made life difficult for Killeshin but they couldn’t match them on the scoreboard.

A Colin Dunne point, the first score of the game, was all they managed in the entire first half.

Luke Attride, Michael Doran, Evan Lowry, Killian Roche and Ross Bolger pointed for Killeshin but they missed a hatful of goal chances too.

Arles-Killeen pulled off two fine saves but other efforts were kicked wide as Killeshin led 0-5 to 0-1 at half time.

Billy O’Loughlin responded and then Killeen struck for a goal when Enda O’Rourke rifled home from close range at the midpoint of the half.

Conor Keightley added another point soon after but that would be Killeen’s final point.

Then with almost the final play, sub Cathal Brennan set up Doran for his second goal and that proved crucial in the end.

The Heath have found form at the right time in the league and a third win in a row this evening against Rosenallis comfortably saw them through to the top four section in Division 1B.

Rosenallis also go through but with a weakened team this evening they were no match for The Heath.

Sean Cotter’s side had lost three of their first four league games but wins over Killeshin, Rosenallis and Ballylinan sees the finish second behind Stradbally.

Good goals from James Phelan and Leon Holland in either half as well as an impressive showing from their half back line of Tony Connolly, Jimmy Nerney and Brian Ging meant The Heath were always on top.

The Heath led 1-5 to 0-4 at the break after playing against the wind and they hit 1-6 without reply in the second half before Donal Lalor pointed a long range free for Rosenallis.

With the game well up, things got a bit out of hand late on with Robbie Dowling and Mark Dunne given their marching orders.

But it made little difference to the end result and both now go through to the top four section where they will play each other again in the coming weeks.

Two late points from Colm Kelly and Darragh Carolan broke Clonaslee hearts this evening and saw them miss out on a top four place.

Mark Bates’ charges fell six points down in the first half with a Benny Lawlor penalty leaving Stradbally 1-6 to 0-3 up at half time.

But the home team embarked on a dramatic comeback and drew level as we headed for seven minutes of injury time.

Darragh Carolan kicked Stradbally ahead again in the fourth minute and if the score had remained that way, both sides would have progressed.

But in the 67th minute, Colm Kelly swung over another free to see Stradbally claim a sixth win and leave Clonaslee battling relegation.