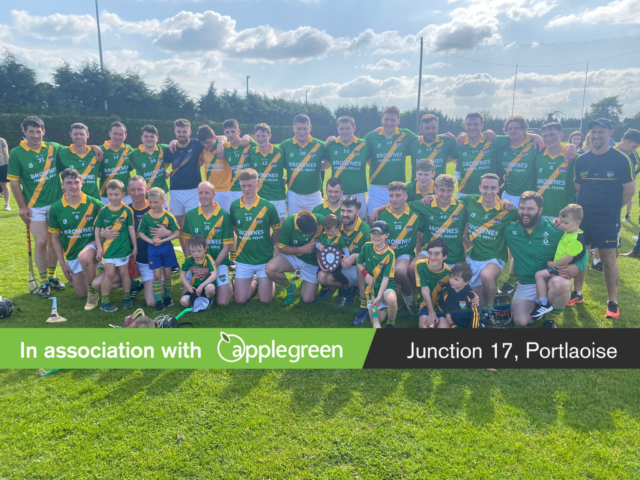 Clonad collected their first piece of silverware in nine years as they claimed Leinster league glory this afternoon.

Midfielder Barry Cormack and full forward Dan McCormack were to the fore in another fine display.

St Laurence’s opened the scoring through Chris Dunne from a free but that would be the only time the visitors would leave the clash.

Clonad’s first attack resulted in a goal when Barry Cormac sent in a ball to Dan McCormack and he blasted it to the net.

Fionn Holland added a point and then St Laurence’s briefly drew level when Dunne’s sideline went all the way to the net.

However, Clonad went straight down the other end where McCormack slipped a ball across to James Whelan and the green flag was waving again.

The sides traded points then before McCormack set up a third goal with a delightful catch and pass to David O’Brien who did the rest.

That left it 3-3 to 1-3 at the midpoint of the half and Clonad kept pushing on.

Ray Killeen and Daniel O’Sullivan added points before the former slapped on the game’s fifth goal.

St Laurence’s ended the half with a flurry of points but Clonad took a 4-6 to 1-7 advantage into half time.

St Laurence’s needed a fast start to the second half to get back into the game but instead it was Clonad who scored their fifth goal.

This was the best of the bunch with Barry Cormack, Ray Killeen and James Whelan all involved before David O’Brien slotted the ball home.

Bartholomew Blanchfield responded with a goal for St Laurence’s after that but their charge faded.

Instead, Barry Cormack kept tapping over points as Clonad won well in the end.