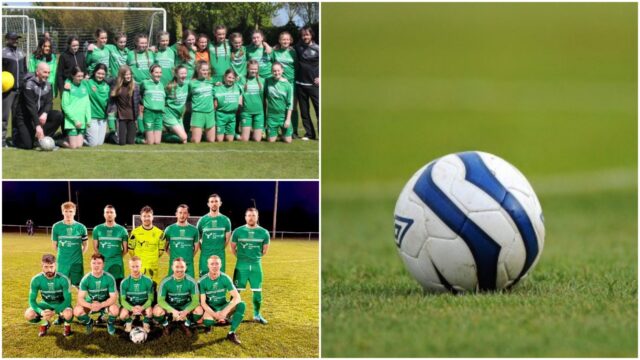 Today will be a historic day for all involved in Portlaoise AFC as two teams compete in finals.

The U-14 girls will make history as they become the first women’s team to take part in an All-Ireland final.

While the Senior men’s team will look to end their season on a high with the Lummy-O’Reilly Cup.

Below, we look ahead to both games:

Just seven years after girls teams were established in Portlaoise AFC, one of them has reached an All-Ireland final.

The girls U-14 team are one step away from immortality as they take on Greystones United in the AUL Complex at 1pm on Sunday.

Not only are they the first girls team to go this far – they are the first Portlaoise team of any description to achieve this feat.

They are also the first team from the Midlands Schoolboys/Girls League to reach a national final in 20 years.

The path to the final started last October with an away fixture in Ballinahown. A cold and breezy day led to tough conditions for both sides, but Portlaoise were just too strong on the day.

Goals from Ciara Breslin, Emma Francis and Maisie Kerry saw Portlaoise come out the right side of a 4-1 victory.

Real Swans in Round 2 was another away day. The rain came on cue, right at the start of the game, and so did Maisie Kerry after just one minute to put us 1-0 up.

Keelin Moore had a fantastic game and grabbed 2 goals. Emily Flynn also bagged two goals from centre-forward, one of which was an excellent counter-attack. It was 5-1 by half time.

Portlaoise girls kept their foot down and in a good all-round performance, the goals flew in. Emma Francis had a commanding performance in the centre of midfield.

A South Leinster Regional Final was the reward, with another away day. This time the opposition was Sallins. Portlaoise had a quick start with a goal from Niamh Dundon and ran out winners in dominant fashion ending with a 5-1 victory.

A bye in the round of 32 meant that Portlaoise welcomed Callan to the Leisure Centre in Portlaoise for the last 16 game. If there had been any doubt that the standards of the teams that they would be facing was increasing, it was quickly dispelled by Callan.

In what ended up being a somewhat bruising affair that tested the squad’s strength in depth the team managed to come out on the right side of a 1-0 score line.

The reward for this hard-fought victory was a quarter final against Clonee. The team hit the road to the capital and yet again raised their standards when the occasion called for it.

Clonee started like a freight train and their slick passing and movement had the Portlaoise girls under real pressure for the opening 10 minutes. For the first time in the competition Portlaoise went behind to a very well taken Clonee goal.

This was a real test of attitude, and they did not come up short. Two goals, from Ciara Breslin and Saoirse Connell-Carroll turned the score line around. A combination of stout defending and hard graft in the middle of the park saw Portlaoise come through deserved winners.

As luck would have it another trip to the capital was required for the semi-final. This time the team had the daunting prospect of playing Shelbourne, one of the biggest clubs in the country.

Again, the standard went up. Portlaoise started much better this time round and, despite playing into a stiff breeze, had the better of the opening exchanges.

A brace of goals by Ciara Breslin either side of half time and third drilled into the bottom corner by Maisie Kerry saw Portlaoise run out winners. The score line looked comfortable, but until the third goal Shelbourne had been right in it.

In the background the coaching team of Dave McCall, Conall Breslin and Raj Bawa have done a huge amount of unseen work in preparing the team for matches and training.

The full squad have all made contributions on the way to this final and fully deserve their shot at glory.

Greystones have their own story to tell, which also includes some great victories on the road, and will provide the Portlaoise team with their biggest challenge to date.

For more from manager Dave McCall, you can check out a special edition of the Talking Sport Podcast.

A couple of hours after the girls kick off, the senior men will be hoping for glory.

The Lummy-O’Reilly Cup is reserved for teams who operate in Division 2 and 3 of the Leinster Senior League.

With Portlaoise finishing fourth in their league and just missing out on promotion, this provides Shane Keegan’s charges with the perfect opportunity to end their season on a high.

They began in Round 1 with a 3-1 victory against Usher Celtic FC where Scott Osbourne netted a brace and Paul Cahillane also scored.

Dublin University AFC were the opponents in Round 2 where a Jason Murphy strike was enough for Portlaoise to progress.

And the same player did the trick in the quarter final where Swords Celtic FC were also defeated 1-0.

Semi finals are typically tough, but Portlaoise made light work of their one.

Newtown Rangers FC were the opponents as two Chris Mulhall goals coupled with strikes from Paul Cahillane and Scott Osbourne saw them win 4-1.

Today’s opponents will provide a tough task as Kilbarrack United won the league that Portlaoise were in.

The first game between the sides finished 0-0 while Kilbarrack won the second game 2-1.

With little to separate them thus far, a close encounter is anticipated.

SEE ALSO – Check out all our Talking Sport episodes here