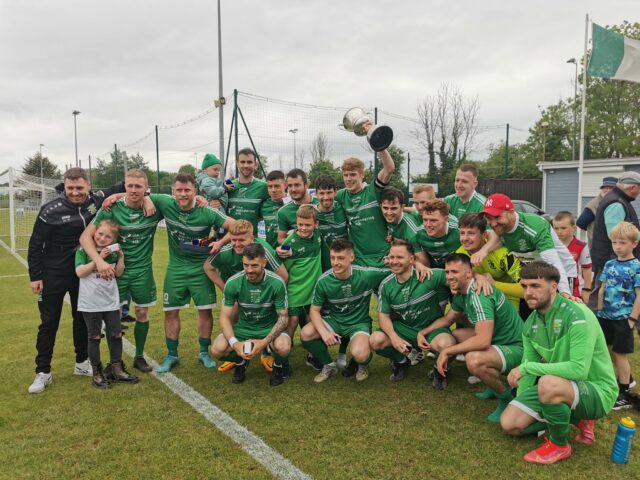 Portlaoise AFC have ended their season on a high thanks to a 2-0 win over Kilbarrack this afternoon in the Leinster Senior League Lummy O’Reilly Cup final.

Portlaoise missed out on promotion from Division 1B of the Leinster Senior League, a division Kilbarrack were the runaway champions in.

This cup competition was for the teams in that league, and the one below it, and an outstanding Portlaoise performance saw them end their season on a high.

The sides were locked 0-0 at half time though they could have taken the lead when Colm Poole hit the post with a shot from distance.

A brilliant start to the second half saw Portlaoise hit the net twice in the space of five minutes.

First a Jack Priestley cross deceived the Dublin side’s goalkeeper ended up in the net and a couple of minutes later Colm Poole and man of the match Chris Mulhall combined excellently for Mulhall to double their lead.

After that it was relatively comfortable for Shane Keegan’s men, though Joe Walshe did have to make a fine save to prevent Kilbarrack from pulling one back.

Kilbarrack ended with two men sent off late on with Portlaoise holding on well.

After the game Chris Mulhall was presented with the man of the match award and captain Oisin Fitzpatrick accepted the silverware.

The result completes a great day for the club, following on from the historic success of the U-14 girls team in winning the All Ireland SFAI Cup only a couple of hours earlier.

Both sides duly travelled back from Dublin for a homecoming at the club grounds in Rossleighan.