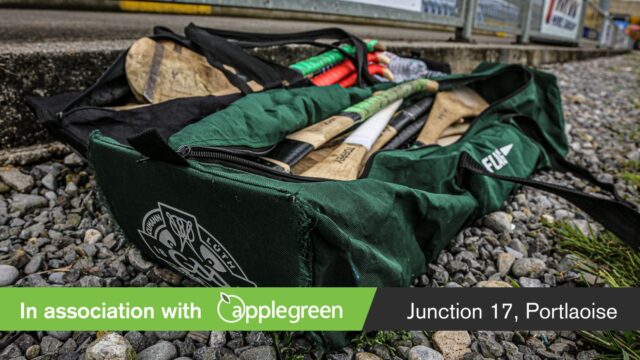 Clough-Ballacolla left Durrow with a nine point victory over The Harps this evening in their ACHL1A clash, the final game of round 4.

Stephen ‘Picky’ Maher led the way for the visitors, putting in a fine performance in full-forward whilst tallying up 1-8 along the way. Michael Lanigan was on form from dead balls for The Harps and kept them in it for large parts of the game.

It was a slow start to the game as both teams tried to get accustomed to the strong wind that was blowing into the Clough-Ballacolla end. Maher opened the scoring with a free, but Lanigan hit four back in quick succession.

Mark Hennessy pointed for the hosts moments before the game’s opening goal.

Tim Delaney’s hard work paid off when he found Sean Corby with a pass, and Corby laid off the ball to Maher who was waiting in space and he found the top corner. Delaney and Maher quickly followed with a pair of points.

Pat Walshe split the posts for the hosts but disaster struck for The Harps when a long ball in from Brian Corby broke through to Sean Corby straight in front of goal and he slotted the ball low past Peter Walsh.

The Harps responded with three points, two Lanigan frees and James Duggan scored from play, but points for Maher and Padraig Brennan gave the visitors a four point lead at half-time against the wind.

Monahan, Duggan, Eoin Clancy and Eoghan Doheny all pointed early in the second half as they battled back strongly, but three points from Maher kept Clough-Ballacolla’s noses in front by three.

That was until The Harps were awarded a free on the 21 and Monahan rattled it into the top right corner to draw level.

Clough-Ballacolla immediately fired back with four points on the trot with three minutes with Cillian Dunne, Brian Corby, Maher and Chris Rafter all pointing.

Walshe tapped one over for The Harps before Monahan executed a beautiful sideline cut over the bar and followed with two frees as the hosts started to build momentum.

They were dealt a savage blow moments later when a long range free from Ronan Broderick bounced in front of the goals and over Peter Walsh’s head straight into the net to put the visitors four ahead again.

Aidan Corby and Cillian Dunne soon followed with points before Dunne put the game to bed when he was finished some wonderful play between Maher and Ciaran Hyland with a goal.

The victory sees Clough-Ballcolla go joint top of the league table with Camross, whilst at the other end The Harps sit level with Rosenallis on no points with four losses from four games.

SEE ALSO – Check out all our ACHL Division 1A coverage here