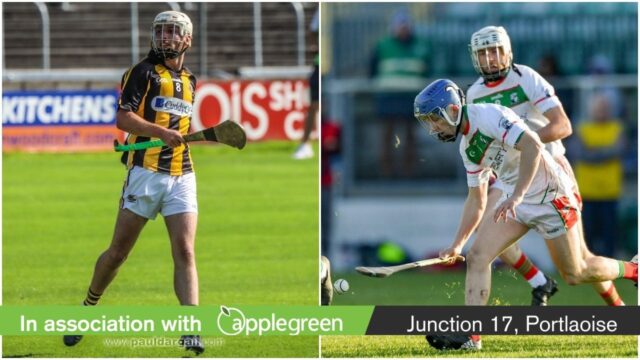 The first club silverware of the year is up for grabs this evening as the hurlers of Camross and Rathdowney-Errill will clash in the ACHL Division 1A final.

Rathdowney-Errill are seeking to defend the title they won last year while Camross are in search of a fourth league success in five seasons – having done three-in-a-row from 2017-2019 before there was no competition in 2020.

David Cuddy’s Camross have enjoyed a very good year to date and have reached the final without losing a game.

They won five and drew two of their seven round robin games – before then receiving a walkover in the semi final from Clough-Ballacolla.

Rathdowney-Errill are managed by Jimmy Dunne and they finished second in the group behind Camross – their sole defeat coming against Borris-Kilcotton in Round 2.

However, they put that defeat behind them by getting the better of the 2021 defeated county finalists in the semi final last weekend.

Camross have had a settled team for most of the year with only Mark Dowling (senior), Tomas Keyes (U-20 and senior) and Dan Delaney (U-20) caught up in inter-county action.

Cathal Cuddy and James Cuddy have graduated up from last year’s minor winning squad and have made appearances this term.

But Camross will be without a few players for this match on Friday evening.

Darragh Duggan was sent off in their final group game with Borris-Kilcotton and as Camross received a walkover in the semi final, he is now suspended for the final instead.

Eoin Dowling and Ori Phelan have both been struggling with shoulder injuries but the latter should be available.

While Lorcan Burke is carrying a knock but Zane Keenan is expected to return.

Rathdowney-Errill defeated Borris-Kilcotton last weekend – and they did it without some of their main men too.

Ross King, Brandon McGinley, Dylan Carroll and James Ryan were all absent in the 2-21 to 1-17 victory.

However, it is believed that all of those bar Ryan should be in contention for a place tonight.

It is hard to call what way tonight will go – as the sides drew when they met earlier in the league.

There was late drama in Errill at the end of May when Tomas Keyes scored a goal to equalise with the last puck of the game.

The late leveller was made all the more impressive by the fact that Camross were nine points down with 10 minutes left in the game and it looked as though Rathdowney-Errill were coasting to victory after a very classy performance throughout.

But grit and determination was the order of the day as Camross clawed their way back for a 3-18 to 1-24 draw.

The game throws in at 7.30pm and you’ll be able to follow all of the action on our Live Blog.