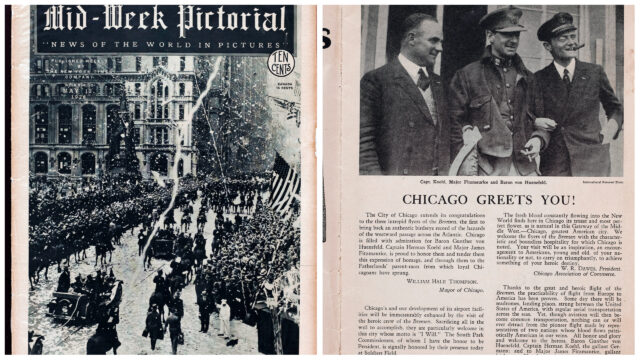 A flag which was presented to Col James Fitzmaurice during his victorious trip around America following the first East West Transatlantic Flight will be presented to Laois County Council during Heritage Week.

The successful flight in 1928 of the ‘Bremen’ across the Atlantic from East to West against the prevailing wind represents a historic achievement.

The crew consisted of one Irishman and two Germans. Colonel James Fitzmaurice from Portlaoise was one of the original members of the Irish Air Corps, and was co-pilot on the ground breaking trip.

The ‘Bremen’ lifted off from what is now the military airdrome at Baldonnell. For that reason, the Irish Air Corps pays attention to this important element in our air history.

The flight represented the bringing together of two continents. All America celebrated and in particular the Irish American diaspora who went wild.

The aviators were feted in many cities across the United Stated, during which time they were presented with an American flag.

The flag of that era (1912-1948) has 48 stars arranged in six horizontal rows of eight. A label stitched on to it carries the words “Government Reg. Pat. Office. Government Quality”.

Mr B Ross MacMahon is presenting this flag to Portlaoise where the young James Fitzmaurice grew up.

The flag has passed to him through a family connection with  Fitzmaurice. Mr MacMahon said: “Laois are cherishing Ireland’s air heritage and the flag should rightfully rest with them.

“One of the first planes to fly in Ireland was built by the Aldritt Brothers in their motor garage with the help of carpenter John Conroy and mechanic William Rogers.

“It was to inspire the young James Fitzmaurice first gained his enthusiasm through the kindly disposition of those in the garage.

“I am delighted to add to the treasure trove of aviation artefacts already in Portlaoise by formally presenting this flag to Laois County Council.”

The flag will be formally presented at an event in the Midlands Park Hotel in Portlaoise on Saturday 20th August at 3pm.

In addition to the presentation, the event will include a talk by the foremost expert on Fitzmaurice in Laois Teddy Fennelly, Fitzmaurice’s time in America, and the formal launch of the Fitzmaurice Archive, a digital archive of conserved newspapers and other documents relating to the first flight, presented by Teddy Fennelly to the Laois Local Studies Digital Archive.

All are welcome to the event, which will mark Heritage Week in Laois.

For details of events taking place in Laois see www.laois.ie/heritageweek.