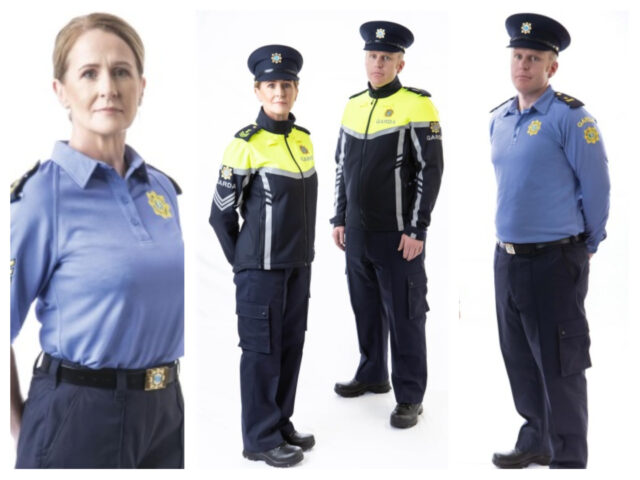 If you’re out and about today and come across a member of An Garda Síochána you’ll notice that they’ll be looking somewhat different than what we’ve become accustomed to.

From 7am this morning a new uniform has been introduced. In what is the 100th anniversary year of the founding of An Garda Síochána, this is only the third time that they have undertaken a formal change of the Garda uniform.

Over the past number of months a logistical operation delivered the new uniform to approximately 13,000 members of An Garda Síochána of Garda, Sergeant and Inspector rank, in excess of 560 Garda stations across every Garda Region, Division, District nationwide.

Logistics were also in place to facilitate size changes and returns across the organisation.

The new contemporary uniform incorporates elements such as durability, protection and functionality and the new elements consist of:

This is the first time that elements of the uniform, other than the uniform cap, will feature the Garda Crest and demonstrates the respect held by An Garda Síochána for this unique symbol as we enter the second century of policing in Ireland.

The current uniform cap remains in operation as a unique and distinctive element of the Garda uniform.

A key finding of the internal Garda Cultural Audit 2018 was a desire from front-line Gardaí for a new, practical operational uniform. Over 6,500 members of An Garda Síochána contributed to the findings of the Cultural Audit.

The new Garda Uniform is also a key recommendation outlined in the Commission on the Future of Policing in Ireland Report, ‘A Police Service For Our Future’.

In developing the uniform, An Garda Síochána embarked on a bottom-up collaboration through the Uniform Committee of An Garda Síochána, including international research and implementing a Pilot Project involving nearly 200 frontline Gardaí based at three Garda Stations (Tallaght, Henry Street and Bunclody).

Following collaboration between An Garda Síochána and the Office of Government Procurement (OGP) at the Department of Public Expenditure and Reform the contract for the manufacture, supply and delivery of the new Operational Uniform was signed in February 2021, and was awarded to James Boylan Safety Ltd (T/A JBS Group), an Irish SME company based in Monaghan.

JBS Group are a privately owned Irish Company established in 1944 that specialises in the supply of operational uniforms and protective supplies.

An Garda Síochána had previously updated their uniform policy to embrace the wearing of official headwear for religious and cultural reasons and beliefs including Turban, Kufi, Topi, Kippah, or Hijab.