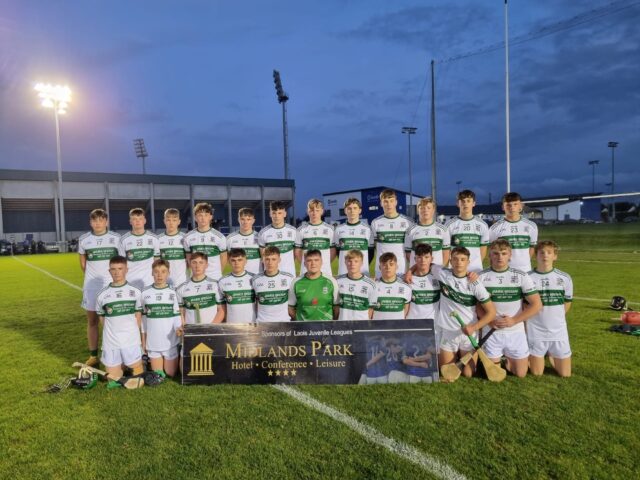 Portlaoise were crowned Minor ‘B’ Hurling champions after they overcame a four point deficit at half time to defeat Park Ratheniska-Timahoe by two points under the lights in the Centre of Excellence this evening.

The Town managed just two scores in the opening half and didn’t register their first from play until the second half.

PRT dominated the play for the first 30 minutes and outscored their opponents by 0-8 to 1-1, led by Eoin Shortall in midfield with four points.

The second half was a totally different story as Portlaoise held PRT to just 1-1 in the second period and hit 1-7 themselves as they clawed back the deficit they faced at the break.

Eoin Shortall got PRT on the board with a solid strike from the right wing that sailed over the bar, kick-starting a good game from the midfielder.

Portlaoise actually found themselves in front a minute later when Davin Dunne did brilliantly to dispossess Padraic Drennan and then win a foul in the square for a penalty.

Brochan O’Reilly charged up the field before burying the ball in the top right corner.

PRT hit back a minute later when Dylan Roche Duff came out on top in a ruck on the 45 before turning and splitting the posts. Eoin Shortall levelled things from a free soon after.

PRT were dominating the play and Jimmy Norton ensured it wasn’t for nothing when he won a high ball from Enda Shortall and pointed to put them in front.

We were level once again on 12 minutes when Sean Devitt pointed a free for The Town, but it would be their last score of the half.

Eoin Shortall found Cathal Tierney with a great pass and the corner forward fired over from close range for PRT.

Roche Duff doubled their lead minutes later with a classic full forward’s point as he held off his man to catch a high ball before turning and sticking the ball over.

Shortall was again involved in the next score but this was his own as he blasted the ball over from 60 metres out from a free.

Robbie Murphy capped off a fantastic opening half for PRT with their eighth point – a great strike under pressure. They led 0-8 to 1-1 and looked good value for it.

Sean Devitt set the tone early in the second half when he dominated a ruck on the 45 before breaking free and slotting the ball over for The Town seconds after the restart.

He missed a few frees in the first half but he was on his way to making amends as he split the posts twice after winning both frees himself.

Conor Raggett got Portlaoise back on level terms midway through the second half with a fantastic strike off his left on the run and it was game on.

Devitt again was on the money from a placed ball to put Portlaoise in front for the first time in the second half – this one from 65 metres out on the right side.

Disaster struck for Portlaoise several minutes later though. Roche Duff was free just to the right of the posts and looked to be bottled up and hit an innocuous shot towards goal that seemed to come to nothing.

Suddenly the umpire’s flag went up and a goal was the call – PRT were back in front.

The crowd were still wondering how that was actually a goal whilst Portlaoise were on the attack and got a fortunate goal of their own.

Sean Devitt dropped the ball just short and a defensive mix up resulted in a goal for The Town and they led once again – you couldn’t write the drama that was unfolding!

Portlaoise sub Liam Conroy solidified their lead with a great point after dropping the shoulder a couple of ways to break free for the strike over the bar and they led by two.

PRT were on the hunt to at least level things up and Enda Shortall reduced the gap back to one with a long range free.

Brochan O’Reilly produced some great moments in goals for Portlaoise and he had the responsibility of taking a free from 80 metres out to put his side two points ahead deep into injury time.

The strike was never in doubt as it sailed into the night sky and over the bar a moment before Anthony Stapleton blew the final whistle and The Town faithful swarmed the field. 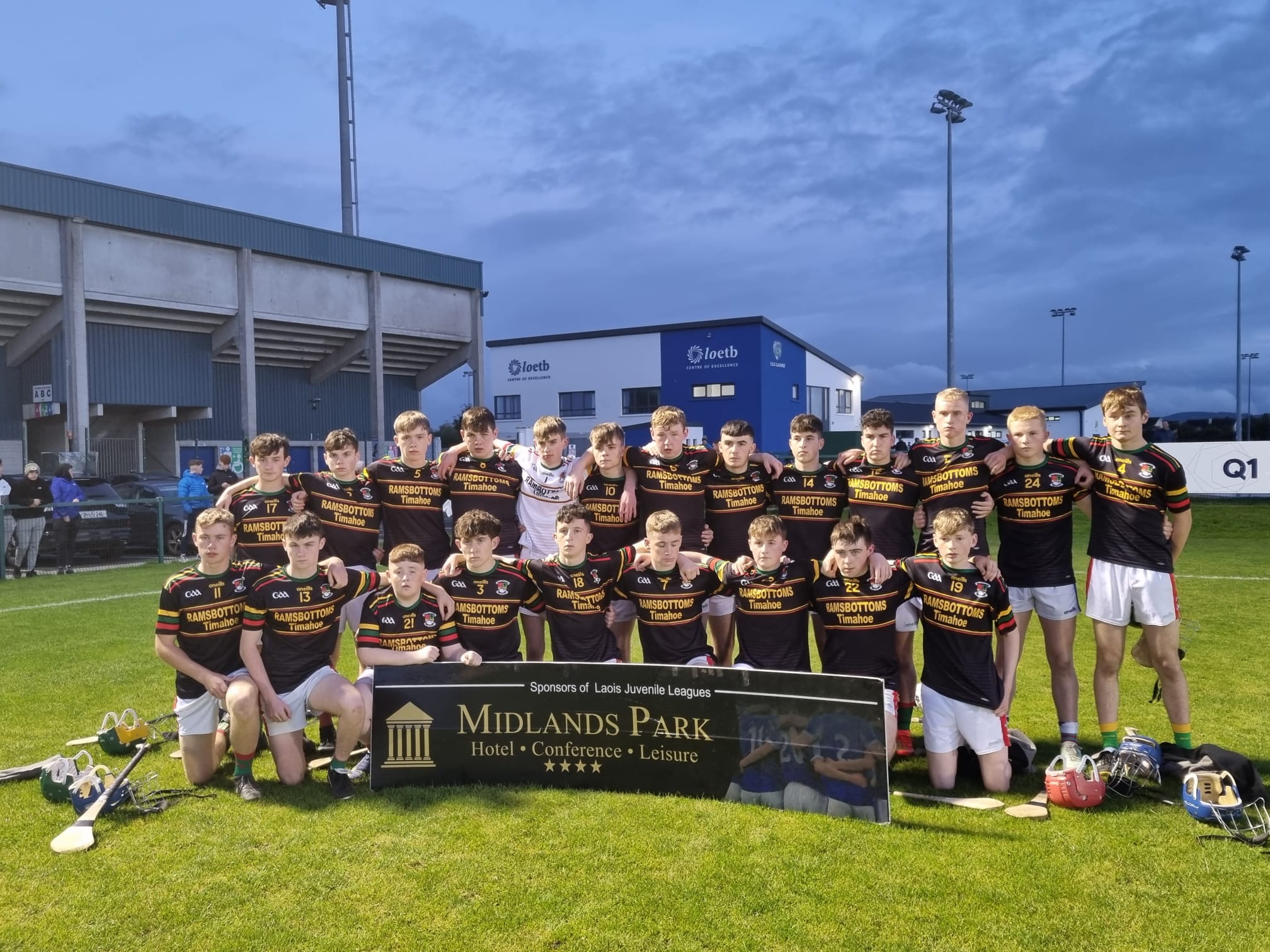 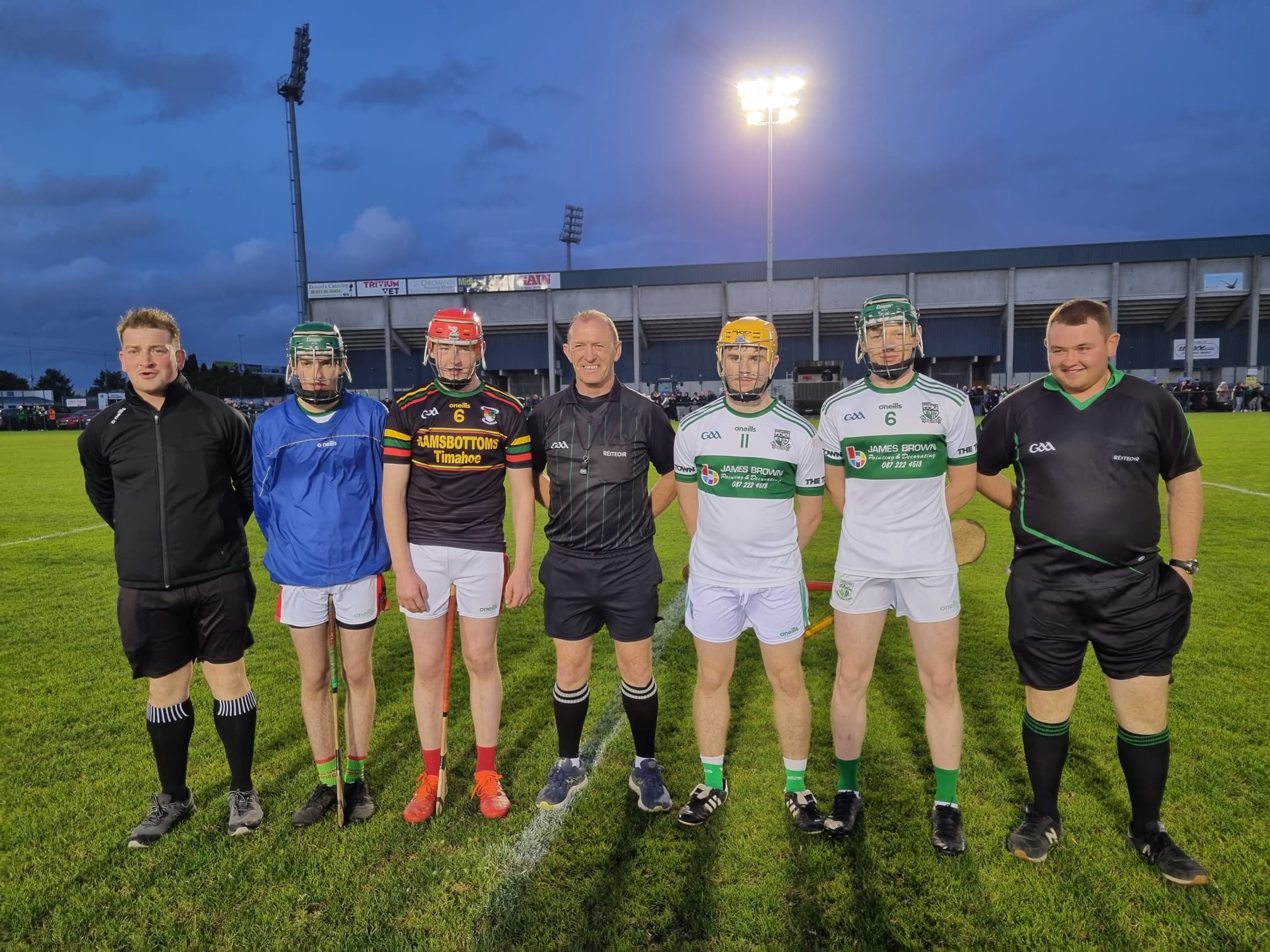 The centre forward for Portlaoise was the driving force that got them back into the game and eventually got them the win in the second half. He missed a couple of frees along the way but his confidence never waned and he scored a particularly impressive effort late in the second half from distance out on the wing and that raised the Portlaoise confidence again heading into the final passages of play.

Conor Ging was also excellent at the back for The Town and cleared the world of ball to the forwards in the second half, whilst Brochan O’Reilly was solid in the goals and got two important scores for his side.