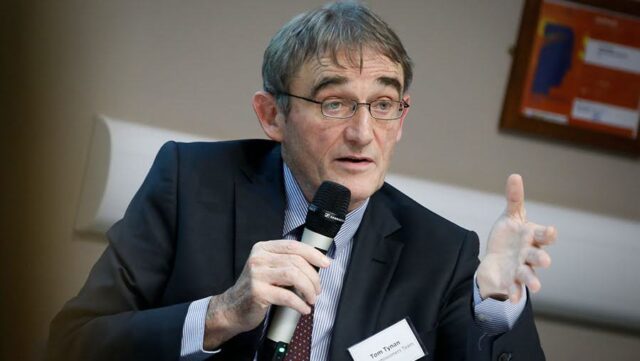 A man with strong Laois connections has recently been appointed as a non-Executive Director of Shannon Foynes Port Company, the second largest port in Ireland.

Tom Tynan, who spent seven years working in the European Commission, most recently as a Member of the Commission’s Cabinet for Trade, has taken up new roles in the marine sector.

Tynan’s roots are in Laois with his family hailing from Pike of Rushall and Borris-in-Ossory and he is a first cousin of well-known Laois natives Darina Allen and Rory O’Connell from Cullahill.

He grew up in Johnstown, Co Kilkenny and attended Thurles CBS.

Mr Tynan will bring his vast experience to the sector, which forms an important part of Ireland’s economy.

Since leaving the EU Commission he has also taken on a non-Executive Directorship with the Marine Institute, Ireland’s national agency for marine research, technology, development and innovation.

Tom is also a director of Agri-Food Bioscience Institute (Northern Ireland), the Northern Ireland Government’s main research and science provider in the agri-food and marine sectors.

A former Special Adviser to the Irish Minister of Agriculture, Food & Forestry and a former member of the European Commission’s Agriculture and Rural development cabinet, Tom’s knowledge of the trade and agri-food industry is extensive.

Maritime affairs/fisheries as well as research and innovation were among his functional responsibilities in the EU commission. Tom is also a former employee of Avonmore Coop, where he worked extensively across Laois and parts of Kildare.

This, together with wide ranging experience across commercial, strategy, operations and advisory roles will benefit the Institute and company boards to which he has been appointed.

Speaking on his appointment, Tom Tynan said, “Horizon Europe is the most ambitious EU Research and Innovation framework programme to date, with a budget of E95.5 billion for the period 2021 to 2027.

“Within that framework programme there are huge opportunities for Ireland in terms of our soil and our ocean, both of whom are huge carbon sinks.

“Horizon Europe offers focused research and innovation policies on soil and ocean health to ensure the full contribution of agriculture and marine to climate change adaptation and the challenging goals of the European Green Deal.”

He added: “The ports sector has a pivotal role to play in Ireland’s energy transition. They are essential partners in delivering government objectives on decarbonisation, supporting the growth of renewable energy generation in Ireland and achieving the government’s target of net zero greenhouse gas emissions no later than 2050, and a reduction of 51% by 2030.

“To help meet the EU goal of climate neutrality by 2050, the European Commission in November 2020 published the EU strategy on offshore renewable energy.

Shannon Foynes Port is situated on the deepest watercourse in Ireland and one of the deepest estuaries in the world.

Renewable energy sources are naturally available in the estuary in terms of wind, ocean and tidal energy.

The Irish west coast has one of the best wind resources in the world.

The ports also benefit from EU initiatives like the Trans-European Transport Network and the Connecting Europe Facility which is a key funding instrument to promote growth, jobs and competitiveness through targeted infrastructure investment at European level.”

Tynan added, “Ireland is one of only three island nations in the EU. Ireland has a sea area that is approx seven times its landmass with one of the best offshore renewable energy resources globally.”

Tynan is a graduate of University College Dublin and UCD Smurfit Graduate School of Business and previously worked with Avonmore Coop, the Irish Farmers Association, IAWS plc and Teagasc.