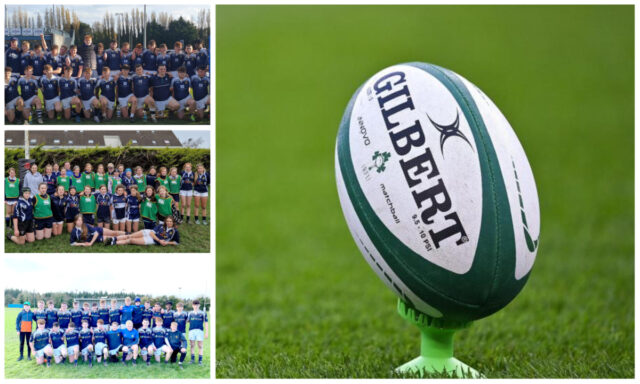 After a nervous opening 20 minutes for Portlaoise it was Dara Phelan who took leadership and got the scoreboard ticking over for Portlaoise as they desperately needed scores on the board as they were playing with a strong wind.

Phelan, with two carbon copy tries, took the ball up on the 10 meter line and with his low centre of gravity he was able to duck and drive through the North Meath defence and cross the white wash.

Mathew Coonan added the two conversions that followed up from an early Penalty that was booted over with 3 minutes of the clock.

With Portlaoise 17-0 up and half time approaching, they were in desperate need to add more points but it was not to be as North Meath forced Portlaoise to give away numerous penalties for holding on in the ruck and the hosts were not going down without a fight.

With just 17 points up at half time and playing against a strong wind in an open pitch, Portlaoise had to work hard to get more points.

They started to earn the right to get the ball out wide by sucking in the North Meath defence which laid the platform for the backs to express themselves.

Further tries from PJ Larkin, Conor Raggett and Adam Glynn put this game to bed and North Meath had no answer. But they never gave up and worked the ball up to score a try of their own.

Portlaoise were not going to let them celebrate too much and were over the try line again on two more occasion as Sam Browne and Robert Keane put the icing on the cake.

Portlaoise are glad to get back to winning ways with man of the match Dara Phelan leading the way. Next up is a home match v Newbridge on Sunday November 27.

Portlaoise welcomed Boyne to Togher on Sunday for a noon kick-off on a cold and breezy afternoon.

In a tight and tough contest, the home side were made to work hard for their victory with the outcome in the balance until late on.

Joey McGuinness was the star performer for Portlaoise with Daniel Whelan continuing his rich vein of form to score a decisive try to settle matters.

The early exchanges were even as both sides sought to get the upper hand in the battle up front. Portlaoise second-rows Bill Rigney and Mark Ging were in the thick of the action as Drogheda-based Boyne impressed with their power and intensity.

Midway through the half, the away side broke the deadlock when a well-judged kick and chase from midfield saw them claim possession inside the Portlaoise 22.

They recycled quick ball and broke through the Portlaoise defence to score under the posts. They added the extras to take a 7-0 lead.

The score sparked the home side into action with front-row Joey McGuinness taking the fight to the opposition with several breaks from the ruck. He was well-supported by Fionn Mullen and Conor Deegan up front in a constant battle with the opposition to gain forward momentum.

The Portlaoise pressure eventually paid off. From turnover ball at a Boyne line-out, the home side put a number of phases together with wing Cormac Paige making a strong carry before releasing Donnchadh Carroll who took a great line of attack only to be stopped just short of the line.

However, Mullen was on hand to power over in the corner to make it 7-5 to the visitors.

It wasn’t long until Portlaoise crossed the white wash once again. Joey McGuinness made a strong gain from a breakdown with Cormac Drea in support to secure possession.

Scrum-half Kyle Moore got the attack moving and quick hands from Matt Cunningham and Aaron Fitzpatrick put full-back Eoghan Kennedy in possession and he weaved his way through a number of challenges to score in the corner and push Portlaoise in front 10-7.

Boyne responded with a well-worked try of their own. They were working hard up front and the pressure caused Portlaoise to concede a penalty just outside their own 22.

They decided to run the ball, and quick hands saw them change the line of attack and breach the home defence to score under the posts once more and regain the lead 14-10.

In keeping with the see-saw nature of the game, Portlaoise got back in front just before halftime. A scrum just outside the Boyne 22 saw the home side open up the back line and, after a number of phases with wing Declan Iguma working hard, Zach Maginness took his opportunity to beat the defence and score to the left of the posts. Cunningham added the extras to make it 17-14 to Portlaoise at the break.

The second half continued the same pattern as the first with both sides having periods of dominance but it was Portlaoise who got the scoreboard moving once again. Paul Byrne, in at scrum-half, set the back line moving and outside centre Daniel Whelan held off a number of challenges to touch down in the left corner to extend the lead to 22-14.

The home side capitalised on their purple patch shortly after when Cunningham added a penalty to make it 25-14.

Credit to Boyne, they capitalised on a Portlaoise knock-on from the re-start and, after a strong scrum, they drove for the line and scored to the right of the posts to reduce the deficit to 25-19.

The game was firmly in the melting post at this stage but the home side rose to the challenge.

After a period of sustained pressure in the Boyne 22 where Nicolas Ibanez went close, the back line kicked into action with Cunningham making a fine break before Whelan worked his magic once again to score to the left of the posts. Cunningham added his extras to make it 32-19 at the final whistle.

A mighty Portlaoise panel arrived in Tullamore on Saturday November 19 for a place in the Leinster final of the Cup.

The much-fancied Portlaoise side were up against an impressive Tullamore team who laid siege inside the Portlaoise 22 for what seemed like an eternity in the early exchanges.

Strong running with crisp precise passing were met by the Portlaoise wall, led by Kate Ging, Jessica Delaney and Chloe Kavanagh. Any observer felt Tullamore deserved to come away with a score such was their dominance inside the early exchanges however the Portlaoise defence had other ideas.

Every single time Tullamore almost crossed the line, Portlaoise were there to stop them.

Portlaoise weathered the storm and began their own assault. Tullamore, smarting from not scoring earlier, were not eager to concede and were every bit as good in the tackle.

In what was to be an intense battle through the middle for both sides, Portlaoise began to find space on the wings and great work from Molly Kelly resulted in the opening score which was expertly converted by Saffron Adams.

The whistle blew shortly after for Portlaoise to go into half time break 12-0 up.

The second half kicked up with the same intensity as the first, however, this time it was Portlaoise who dominated possession.

Portlaoise began to up their game as Amy Peters robbed a ball in the line-out and set Portlaoise up for another attack.

Tullamore were putting in a serious defensive effort when the ball broke to Freya Stanley and despite close attention from Tullamore and the goal posts, smashed her way over the line for Portlaoise’s fourth try of the day.

Portlaoise were playing the best rugby now. Aoibheann Conroy was a real threat on the wing every time she encountered the ball, and the scoring was still not finished.

Tara Peavoy and Keelin O’Brien entered the fray, both were involved in setting up Louise Hyland, who made the carry of the day despite close attention from several Tullamore players and set up the ever-impressive Lilly Brophy for another Try. Portlaoise now led 29-0

In what reads like a very one-sided affair, it was in fact very different. This Tullamore side were fantastic, great in the tackle, great runners, well disciplined and on any other day against any other team would have had a different outcome however, this Portlaoise side are a different class.

Tullamore did mange to get a try in the final moments of the game but it was just a consolation.

PRFC U-14 panel of players would like to thank Koren Dunne (who now plays her rugby for Barnhall RFC while having also represented Leinster and Ireland at U-18 level) for her continued support of the team.

Once again, she was on hand to prepare the panel of players in their preparations for their Leinster Cup semi-final clash with Tullamore RFC. She travelled with the team and was more than generous to share her knowledge of the game and mentored players on the day.

There is no doubt that her continuous involvement with this group of players has added to the positivity of the team and the success on the field.

In return, the girls would like to wish her continued success in her own rugby career and plans are afoot for the panel to attend one of Koren’s matches to see her in action on the rugby field.

The Cup final is set for the December 17 and Portlaoise will take on Greystones RFC in Carlow IT’s grounds. 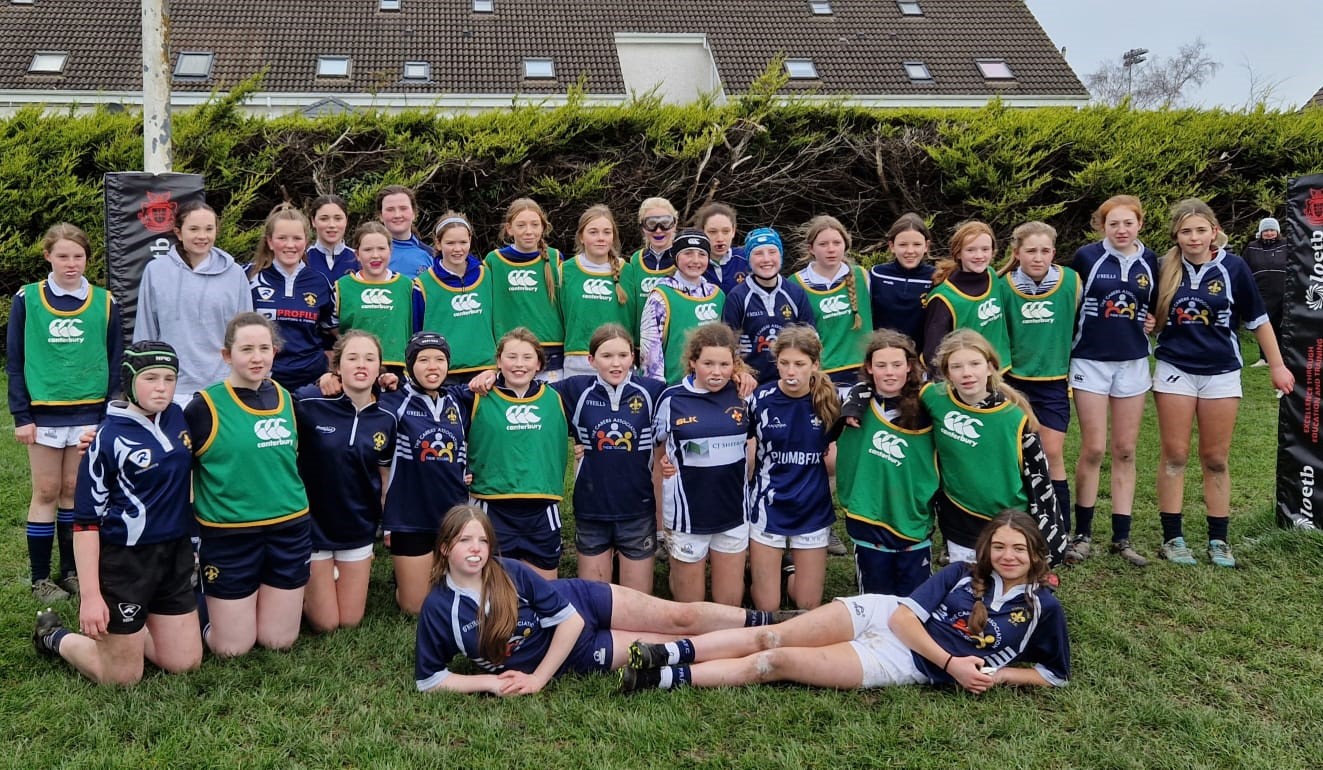