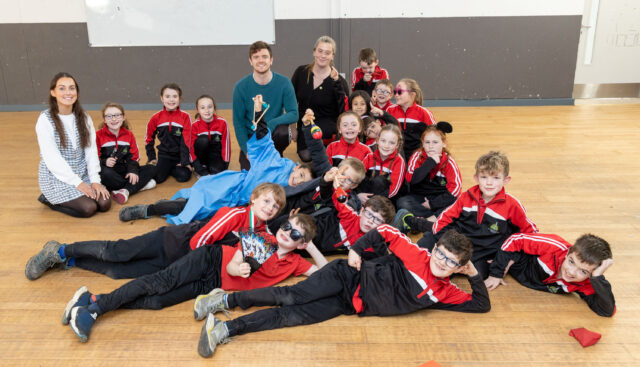 The primary school workshops began with simple and fun, physical and vocal warm ups, followed with a variety of games to increase energy and focus.

The workshops also included ensemble exercises where children learn to work together through basic stage games. The workshops finished off with simple scenes for the children to act out.

In spring 2023, Emmet is making a short film called ‘Voodoo’ in the Timahoe and Cullenagh areas.

A public screening of ‘Voodoo’ will then be held in the Timahoe community hall with a cast and crew Q&A. In addition, young people from the local Foróige club will take part in an acting workshop.

He began acting in Dramsoc NUIG – there he achieved a BA in Politics and English and a Masters in Drama and Theatre.

After four years of intense participation in the dramatic life of the city and university he moved to Dublin to pursue a career in acting. For the last decade he has lived and worked there and, intermittently, the UK.

Most recognised for his extensive theatre work, having appeared on most of the major Irish stages with many of our leading theatre artists – recent theatre projects include NW Trilogy in the Kiln Theatre in London, The Great Hunger and The Long Christmas Dinner with the Abbey and an acclaimed performance in Blood Wedding in the UK early 2020.

Screen highlights include a central role in RTÉ’s Striking Out with Amy Huberman and co-starring in an episode of Lore on Amazon Prime.

Emmet is a 2022 recipient of the Made in Laois ‘co-create’ grant scheme for co-creation and collaborative initiatives that contribute to creative and cultural activities within Laois, and is supported by Creative Laois as part of the Creative Ireland Programme in partnership with Laois County Council.