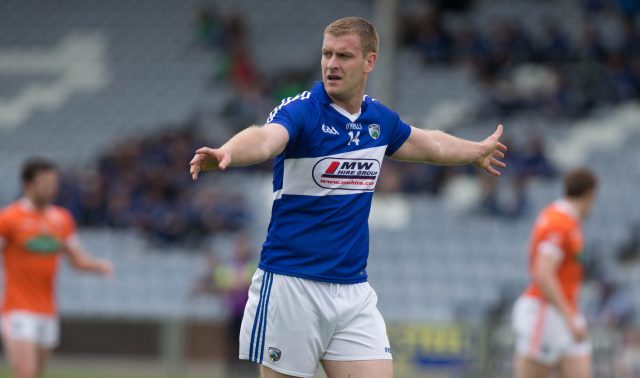 Donie Kingston helped himself to 1-7 and Sean Moore got 0-3 on his senior debut as the Laois senior footballers got 2017 off to a winning start in Crettyard on Sunday afternoon.

For manager Peter Creedon it was a positive start as he gave 10 players their first senior outing and saw off a strong-looking DIT side with plenty to spare.

There was also a return to the inter-county scene for Denis Booth, Ambrose Doran, James Finn and Sean Ramsbottom.

The game was very competitive for most of the first half. DIT included Mayo’s Conor O’Shea and All Ireland club winners Aran Waters of Dublin’s Ballyboden-St Enda’s and Martin Farragher of Galway’s Corofin. Cavan’s Conor Madden was also an impressive performer at corner-forward and his ‘45 following on from two points from O’Shea had them 0-3 to 0-1 in front after ten minutes.

But Laois soon found their rhythm. Kingston kicked a free to reduce the deficit and then Moore showed some of his undoubted magic with two points in quick succession to put Laois into a lead they would hold for the remainder of the game.

Kingston’s third point put Laois 0-5 to 0-3 in front and although Madden responded for DIT, two Kingston frees had Laois 0-7 to 0-4 ahead at the break.

The second half didn’t have the same enthusiasm. Moore and Farragher exchanged early points before the experienced Colm Begley then came up from wing-back to land a nice point from distance.

Madden got his third to keep the gap at three points but things were beginning to come a bit easier for Laois. Brian Daly kicked a lovely point after a well-worked build-up and Kingston added another free soon after.

Kildare’s Con Kavanagh responded with a free for DIT but a fine left-footed effort from Kingston, followed quickly by two long-range points from Ambrose Doran had Laois seven clear.

Sean Moore then put Kingston through for the game’s only goal and it was a case of seeing out time from there. Eoin Cummins got a late consolation point for DIT but Ambrose Doran got the game’s last score to help Laois to an 11-point win.

Laois now travel to Wicklow on Wednesday night and finish with a clash with Meath in Stradbally on Saturday night.