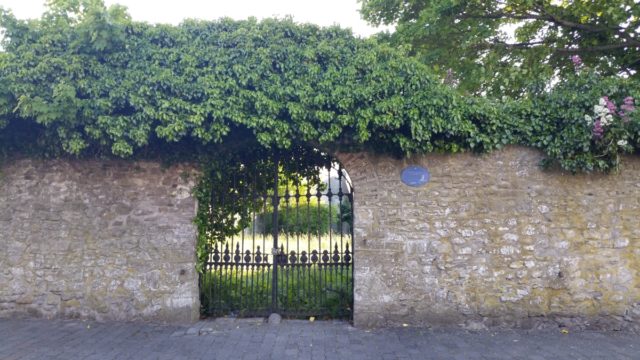 An historic Portlaoise church has been selected as one of just seven sites to take part in the Adopt a Monument Scheme run by the Heritage Council.

The Old St Peter and Paul’s Church dates back to the 16th century and has been carefully tended to by the Portlaoise Tidy Towns committee.

The sites from across Ireland range in size and date from an early medieval ringfort in Limerick, to the precarious ruins of a medieval castle on an Atlantic cliff in Donegal and a 19th century mining landscape in Slieveardagh, County Tipperary.

Speaking about the sites chosen, Ian Doyle, Head of Conservation at The Heritage Council said,  “While it was originally planned to have just four new sites join the Scheme, we received over 50 applications from community groups across Ireland.

The energy and enthusiasm of the seven groups shortlisted made it impossible to choose between them. Each of the sites are unique and represent important aspects of Ireland’s heritage. We are really looking forward to working with the community in each area to uncover the stories of their local archeological and heritage site”, added Doyle.

The seven sites chosen include:

Located near Ballyshannon, Kilbarron Castle is a ruined of a medieval castle and the birthplace of Mícheál Ó Cléirigh [the chief author of the famous Annals of the Four Masters]. The ruins are currently in a very precarious condition and the Kilbarron Castle Conservation Group are eager to protect, conserve and interpret the remains of the site.

The extensive eighteenth century walled garden was once part of the large Bellew estate. The Mountbellew Heritage and Tourism Network want to conserve the large limestone walls that surround the gardens, and to restore some of the original features of the gardens and to establish allotments to help people to discover the heritage of the locality and to provide opportunities for employment and tourism in the region.

St Molaing’s Millrace is a stream leading to a historic mill, which according to local tradition and folklore was dug by the saint by his own hands. Today, the remains of this are heavily overgrown. The St Mullins Amenity and Recreational Tourism Group Ltd want to develop an understanding of the archaeology, pilgrimage traditions and folklore related to the monument, and to ensure the protection of the monument for future generations.

Old St. Peter’s Church is one of the oldest buildings surviving in Portlaoise and dates back to the middle of the sixteenth century. The Portlaoise Tidy Towns group, wish to conserve the historic fabric of the site, and to recreate a place for peaceful reflection within the busy town centre of Portlaoise.

The powder house is part of an enormous industrial coal mining landscape that once stretched from Tipperary to Castlecomer. The powder house is the last example of a Cornish powder house from a coal mine that survives in Ireland. The Slieveardagh Mining Group want to preserve and protect the important industrial heritage of the locality, and to raise awareness of the social history of the area.

This large Anglo-Norman motte appears to stand on the site of a significant early medieval ringfort. The Kilfinane Community Council wish to develop an understanding of the archaeology and heritage through survey and geophysics, to better promote and protect this important monument for future generations.

The important medieval church and graveyard at Knockboy is home to seven ogham stones which were built into its walls. Ogham is the earliest Irish evidence for literacy dating to the fifth century AD. The Knockboy Church Conservation Group wish to carry out urgent conservation work on the weather-damaged gable of the church.

The Adopt a Monument Scheme offers communities expertise, mentoring and support to help them to care for their local heritage, work collaboratively to develop and understand the story of their locality.

The Scheme first began in 2016 with six community groups ‘adopting’ their local monuments, with mentoring, training and specialist expertise provided by the Heritage Council and experts from Abarta Heritage.

“The seven sites chosen for 2017 will benefit from extensive training, mentoring and specialist advice. One of the key components of the Scheme and one which makes it so unique is the development of positive partnerships between communities and heritage specialists, which helps to ensure the sustainable future of their monuments”, added Doyle.