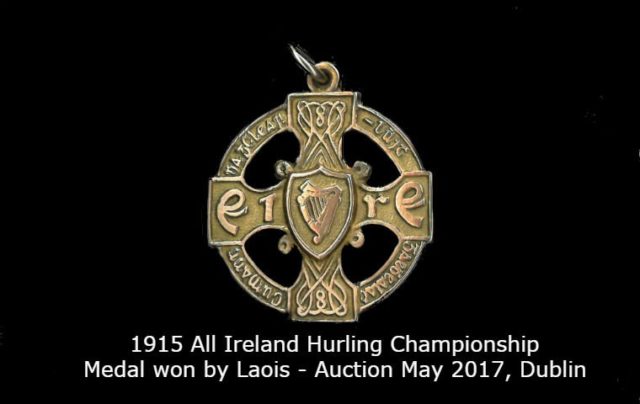 An extremely rare Laois All-Ireland medal from 1915 is set to go under the hammer next month.

Auctioneer George Fonsie Mealy, of Fonsie Mealy Auctioneers, said the type of medal is not one that you encounter very often.

“The only other one I know of is in the United States and is retained by the family of Bob O’Keefe.

“He was a Kilkenny man who moved over to Laois and played in the 1914 All-Ireland final losing to Clare before they won it in 1915,” Mr Mealy said.

Of course, O’Keefe would later be immortalised by having the Leinster Cup named in his honour in recognition of his contribution to hurling.

The Laois team at that time were trend-setters, adopting a more organised approach to training and getting in hurls from Kilkenny.

“It is wonderfully intricate in its simplicity,” he said.

He added that the real value of the medal, is its historical significance, from a final a year before 1916 and in a time when the GAA as an organisation was still a fledgling one.

“At the time the association was being repressed by the authorities and a lot of matches were being delayed, and finals were put off,” he said.

He said no such medal from Laois is on display in the GAA Museum in Croke Park. He is not aware if the Laois County Board have any in their possession.

“It would be lovely to see it stay in Laois. There is plenty of money in Laois so hopefully there will be a battle royale to buy it,” he said.

He added that a person such as Cathal Jackson, “a proud Laois” man would be an ideal person to purchase it for his renowned Copper Face Jacks (Coppers) nightclub and the Jackson Court Hotel.

The auction will take place on May 30 in Dublin.