The Laois minor footballers lost in controversial circumstances to Louth in the first round of the Leinster Minor Football Championship on Saturday.

And now, thanks to TG4’s highlights package (at the bottom of the piece), you can make up your own mind as to whether or not Noel Delaney’s side were hard done by.

Laois lost the game by 2-11 to 0-15 in O’Moore Park by a number of decision by Westmeath referee Niall Ward and his officials went completely against the home side. 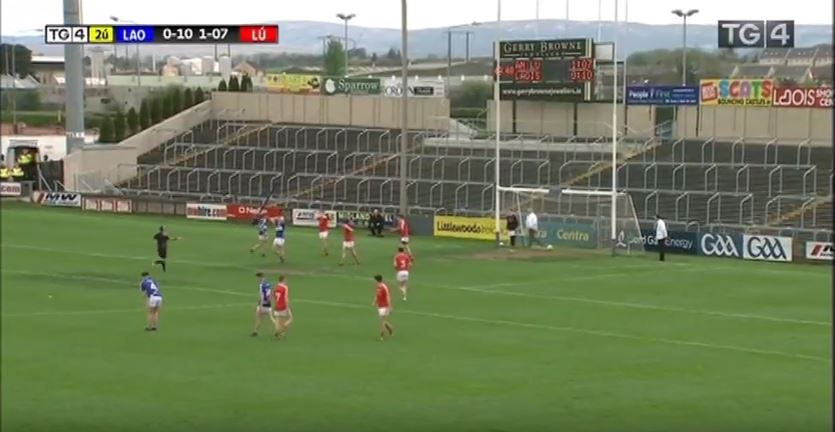 At 5:00 on the below video, Laois are awarded a penalty after Diarmuid Whelan is tugged back in the penalty area.

However, the Ballyroan-Abbey man did smash the ball to the net as the referee blew his whistle and perhaps he should have allowed advantage to be played before signalling for the penalty.

The decision was made even worse by the fact that Alan Kinsella’s resulting spot kick was saved. 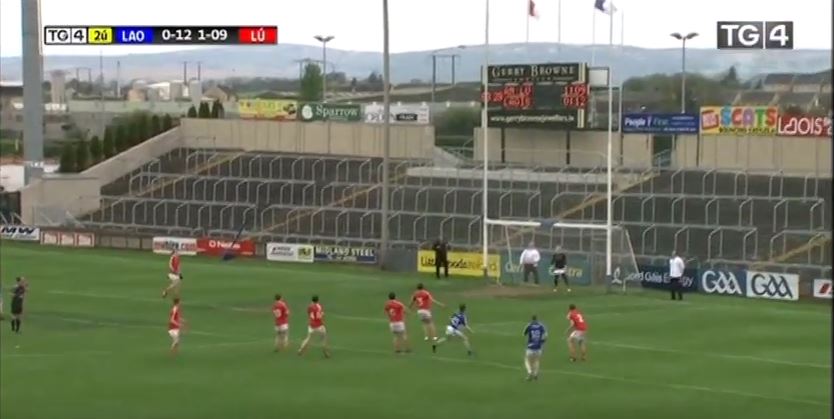 The next incident actually involves two passages of play. The first begins at 6:13 in the video where Laois, with virtually the last kick of normal time have the chance to win the game.

Damien McCaul wriggles away from several Louth defenders before shooting and the ball loops into the air. It’s unclear from the camera whether or not it did go over the bar, but after considerable deliberation, the umpires signal it wide.

However, if you move forward to 7:28, Louth have a free to level the game. John Gallagher’s effort goes miles into the air and again causes great debate between the umpires who eventually signal it wide.

Nevertheless, referee Ward, who isn’t standing in a great position when the free is taken, decides to go in and consult with his umpires before over-ruling their decision and signalling a point. Something he didn’t do for McCaul’s effort. 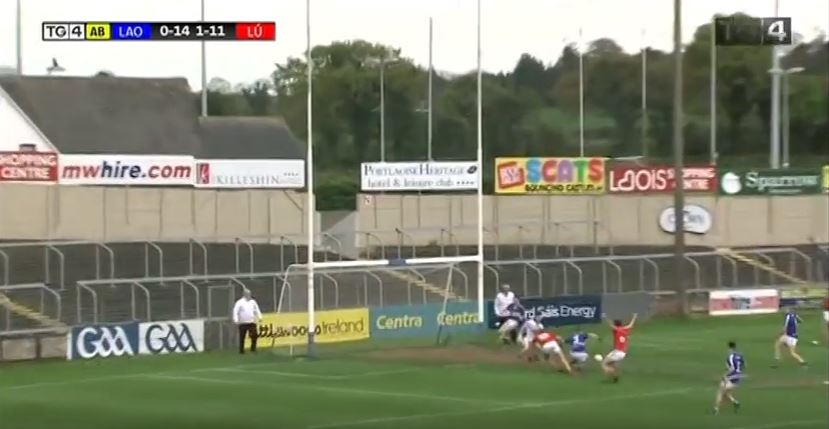 The final controversial incident also involves two passages of play. If you move to 8:00 of the video, you will see Louth pick up the ball in the middle of the field.

The ball is played in to John Gallagher who has his effort blocked excellently be Seán O’Flynn. Incredibly, the referee signals for a penalty.

If you look at the slow-motion version of the event, it clearly shows that Gallagher kicked the ball at O’Flynn. Louth would score this but the ultimate punishment was still to come for Laois.

Move forward to 8:45. Ciarán Comerford’s pinpoint ball in fielded close to goal by Diarmuid Whelan and he is grappled to the ground by two Louth defenders.

Surely Laois would be awarded a second penalty? But no, referee Ward decided to give a free out in what was a truly bizarre decision.

Leaving O’Moore Park on Saturday, we believed that Laois were hard done by and this footage certainly backs up that stream of thought:

So Laois were beaten and they now head for the Qualifiers where they face the daunting task of traveling to Navan to face Meath on Saturday May 6.