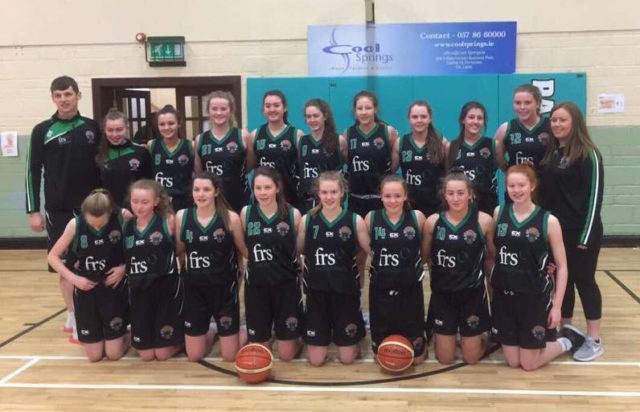 The girls took to the floor on Sunday against Clonalsee in what they knew was going to be a tough battle right to the final whistle, judging by their previous encounters this season.

While Portlaoise notched up the first score of the game with a superb basket by team captain Amy Byrne, Clonaslee started the game much stronger and were showing more determination. They were hungrier in the opening quarter and were coming out on top in every 50/50 opportunity.

A lazy defence allowed Clonaslee hit 2 big three pointers through their captain Annie Digan. The defence of the title was on the line and the girls had to increase their intensity in order to stay in touch. Sophie Delahunt was very unlucky not to add to the girls tally with a brilliant baseline drive.

The last two minutes of the quarter saw the girls come into the game more with Hannah Collins now starting to dominate under the boards and two scores by Ciara Byrne and a late basket by Jasmine Burke saw the girls trail 9-7 at the end of the quarter.

Portlaoise put in a much better performance in the second quarter. Jasmine Burke added another score early in the quarter, followed by a massive three pointer by Shauna Dooley. The girls were starting to get into a better rhythm and the introduction of Gillian Wheeler made a big impact as she picked up a score almost straight after Ciara Byrne picked up a steal.

It gave the girls a huge lift to see Wheeler enter the game after missing the AICCS due to an ankle injury. The girls were settling on offence and a really well executed play was rewarded with a long range two pointer by Grainne O’Reilly.

The intensity of defence was proving to be too much for Clonaslee and they were now struggling to find scores. Gillian Wheeler and Shauna Dooley added two more points each before Sarah Fleming finished the quarter with a fake and jumper from the top of the key. The girls held their opponents to only 4 points in the quarter and took a 6 point lead into the third.

The Panthers kept up the intensity at the start of the third and stretched their lead to 11 points immediately with another basket by Wheeler assisted by Amy Byrne and a second three pointer from Shauna Dooley.

Rebecca Reddin had two long range jumpers roll around the net and pop out before she had a brilliant interception to stop Clonaslee from scoring. Ellen Garvey picked up some great defensive rebounds and was very unlucky not to capitalise on an offensive one.

The ever reliable Ciara Byrne made a huge interception and finished an open lay-up before Sarah Fleming, for the second time, finished the girls scoring. The Panthers led 27-15 going into the final quarter.

Seona McKittrick made a big impact on defence dominating the boards and showed great patience to ensure to the girls could capitalise on offence. Byrne and Fleming picked up the only two scores of the quarter.

Aimee Collier again showed great athleticism to out jump her opponent and win 50/50 balls. Jade Burke saw herself play in a new role and was completely unfazed by it. She took it in her stride and helped to control the game with patient play. Lauren Dwyer played another solid game as she saw out the last few minutes on the floor as an U-16 player.

Isobel Donnery again showed her quick hand picking up some interceptions and was very unlucky with two outside shots. The girls maintained their 12-point lead and were duly crowned Top Four Champions 2017! There is a lot more to come from this group of girls in the future.

The U-16 girls were in contention for five titles at the beginning of this season, with three already in the bag the girls took the floor to retain their Top 4 title won last year.

After the huge success at the AICCs last weekend in finishing third the girl’s confidence was high and the aimed to bring this into their games and keep the cup in the club for the fourth consecutive year.

The girls began the defence of their title with a semi-final against Tullamore. They were dominant from the start getting the opening five scores of the game and giving themselves a comfortable lead after just three minutes. Jasmine Burke opened the scoring with a well worked play ably assisted by Ciara Byrne.

Shauna Dooley was dominant on both ends of the floor controlling the game and setting up her teammates for fast breaks while also adding a big 3-pointer. Ciara Byrne ran the floor well getting on the end of fast breaks. Amy Byrne had an impressive first quarter catching some great rebounds and making some very good scores for herself.

Sophie Delahunt was immense on defense forcing turnovers and picking up some great steals. Sarah Fleming also played very well helping the girls increase their lead with two free throws at the end of the quarter. Portlaoise led 15-3 at the break of the quarter.

The second quarter continued in much the same fashion Grainne O’Reilly and Rebecca Reddin controlled the game from the top of the key while Aimee also added six points. Jade Burke found herself in a perfect position at the end of a fast break to add to the girl’s tally.

Izzy Donnery did very well putting pressure on in defence and was unlucky not to add to the girls lead. The girls held their opponents to only 2 points in the quarter and Portlaoise led 32-5 at the break.

The second half continued in much the same fashion with Portlaoise the better team on both ends of the floor. Ellen Garvey was very effective picking up some great rebounds and getting a very good basket.

Lauren Dwyer when introduced back into the game kept the intensity of the game up holding their opponents to just 4 points again in the second half.  The game finished with a comprehensive win for Portlaoise on a scoreline of 62-9.