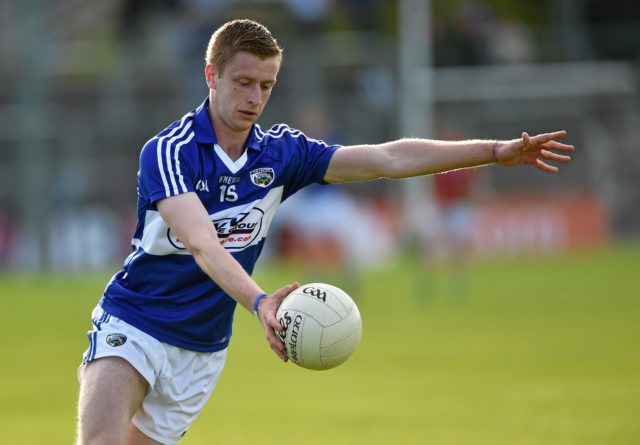 Brought to you in association with DS Sports

Laois’s ability to take their goal chances made all the difference as they recorded a big win over Longford in O’Moore Park this afternoon.

The prize is a Leinster quarter-final with Kildare in Tullamore in two weeks time.

Two goals in a minute before half time – from Paul and Donie Kingston – and two more early in the second half – from Paul Kingston and Alan Farrell ensured the Laois win.

Laois played with the wind in the first half and their determination to go long to Donie Kingston was evident early on as Evan O’Carroll went long to the big man and he palmed the ball to Niall Donoher who fisted it over the bar.

Laois went two up from the resulting kick-out with Evan O’Carroll scoring off his left boot.

And Laois were three up in as many minutes when Brendan Quigley’s long ball was once again won by Donie who passed to younger brother Paul who pointed.

Laois kept piling on the pressure and Donie kicked the first free of the afternoon to move Laois four clear.

Longford hit back with a Robbie Smyth free but it should surely have been a goal only for a wonderful save from Graham Brody to deny Seán McCormack in the build up.

Donie Kingston then kicked one from play before Smyth hit back with his second free to leave Laois ahead by 0-5 to 0-2 after 10 minutes.

Laois’s next score came from Eoin Buggie after a delightful crossfield ball by Colm Begley but it was cancelled out by Smyth’s third.

Brendan Quigley got Laois’s seventh point after a long ball bounced fortuitously over the bar but there was nothing lucky about Pádraig McMahon’s effort which moved Laois five clear.

And the margin was six after fifteen minutes when Donie Kingston kicked a free off his left foot following a foul on Alan Farrell.

Robbie Smyth was proving to be Longford’s only scoring threat and he notched another two as Longford enjoyed a scoring spree which saw Sean McCormack score as well.

Laois needed a repose and they did. John O’Loughlin moved them three clear before they struck for two goals in a minute.

The first came when Padraig McMahon picked out Paul Kingston on the edge of the 21 and he beat his man before finding the top corner.

And from the resulting kick out, Donie Kingston played a delightful one two with Evan O’Carroll before planting the ball in the bottom corner to give Laois a 2-10 to 0-7 half time lead.

Laois took that dominance out onto the pitch in the second half and scored a third goal with their first attack. Donie Kingston found Darren Strong in space and he played in Alan Farrell who’s scored with low shot.

Laois had a fourth goal after 40 minutes when Donie set up younger brother Paul who calmly shot low from the middle of the goal.

Laois were now fifteen points ahead with less than 25 minutes to play and it remained that way after Colm Begley and Robbie Smyth traded points.

Smyth and Ronan McEntire raised white flags for Longford but Laois kept the margin at 13 thanks to Donie Kingston and John O’Loughlin.

Conor Berry and O’Loughlin swapped late points but it was immaterial at that stage as Laois eased home.