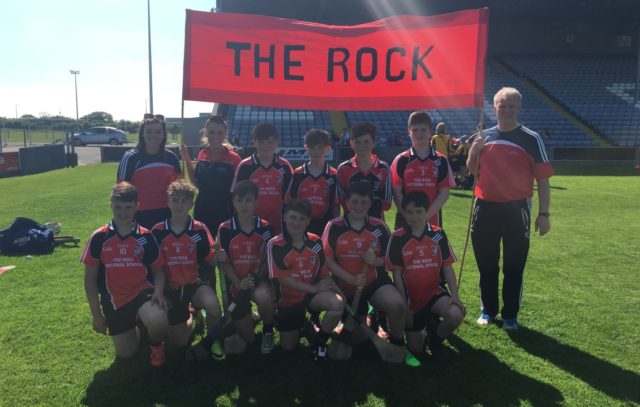 The Rock went goal crazy as a strong first half saw them brush aside the challenge of The Heath in the Roinn 4 hurling final.

The lads in red and black racked up a tally of 3-4 before The Heath had troubled either umpire and although the defeated side rallied well after that, they could never recover.

Jack Ahern scored the first two points of the encounter before setting up Rory Culleton for The Rock’s first goal.

Ahern added two more points before Culleton and Liam Connolly struck for two more goals to move The Rock 3-4 to no score ahead.

Seán Kirby finally lifted the siege with a point for The Heath but The Rock responded in devastating fashion with two more goals from Ahern and Culleton.

The Heath ended the half on a high with Kirby and PJ Larkin raising green flags while a Ben Doyle free left the score reading 5-5 to 2-2 in The Rock’s favour at half time.

The Heath carried that good end to the first half into the second as Ben Doyle struck for a goal within seconds of the throw in.

Conor Byrne and Conor Brown then traded points and although Liam Connolly notched a sixth goal for The Rock, The Heath hit two more through Brown and Doyle to leave the score reading 6-7 to 5-3 with ten minutes to play.

However, The Rock found another gear as Ahern and Culleton scored points either side of goals from Ahearn and Conor Byrne to run out 15 point winners in the end.

County Final Memory: Rathdowney-Errill come together and come of age in 2006

When the Shanahoe ladies footballers made their senior breakthrough in 2006