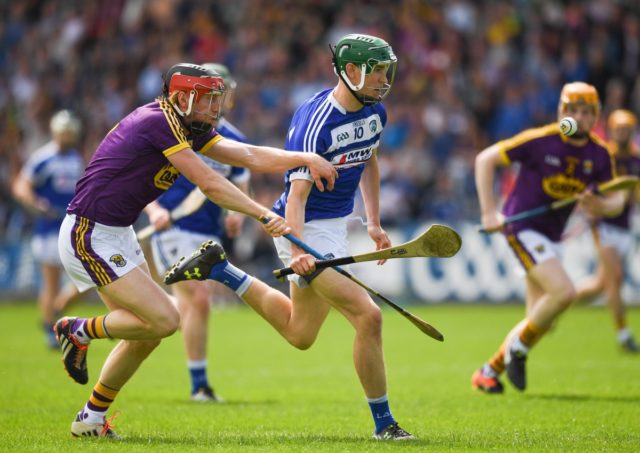 Laois’s Leinster hurling campaign is over after they were well beaten by Wexford in O’Moore Park this afternoon.

Eamonn Kelly’s men finished the game with 13 men after Cha Dwyer and Willie Dunphy picked up second half red cards.

Dunphy will be ruled out of the All-Ireland Qualifiers where Laois now head but Dwyer will be available after his was as a result of two yellow cards.

Laois played well for periods, especially at the start of the first half, but they could never really cope with the attacking threat that Wexford possessed.

They played with the wind in the first half but went in five points down at the break and that was never going to be good enough.

With less than 20 seconds on the clock, Wexford almost had the game’s first goal. David Redmond beat Enda Rowland but Lee Cleere got back to clear the ball off the line.

The resulting 65 was missed and Laois went down the other end and opened the scoring thanks to an excellent point from Stephen Maher which was followed by another from Ross King.

And Laois went three up after four minutes from a King free before disaster struck.

David McRedmond looked to have over hit his pass to Harry Kehoe but Enda Rowland missed his attempted clearance and Kehoe finished the ball into the empty net.

Wexford looked like they could score a goal with every attack and Enda Rowland redeemed his earlier error to pull off a top class save from Aidan Nolan but Conor McDonald soon pointed to put Wexford ahead for the first time after 10 minutes.

But a wonderful piece of skill in midfield from Paddy Purcell had Laois level a minute later but Jack O’Connor hit straight back for Wexford.

Laois regained parity through another King free and they had a great chance of a goal soon after but Purcell shot wide after failing to see Neil Foyle unmarked inside of him.

Conor McDonald edged Wexford back in front with his first free of the afternoon and the gap was two for the first time after 18 minutes thanks to Lee Chin.

Laois were struggling to make the ball stick in their full forward line and Wexford punished them through Harry Kehoe.

The O’Moore men needed a response and they got it through Ciarán Collier from long range to leave the scoreboard reading 1-5 to 0-6 after 25 minutes.

Cha Dwyer and David McRedmond swapped points to maintain the four point margin as we entered the final five minutes of the half.

But Wexford were really starting to get on top now and they entended their lead to six points thanks to Aidan Nolan and Paul Morris while Lee Chin really should have had a second Wexford goal after he intercepted a wayward Ross King pass but he fired wide.

Laois hit the next two points via a Ross King free and one from play from John Lennon but Wexford had the final say of the half as Jack O’Connor scored from 60 metres to leave them 1-11 to 0-9 ahead at half time.

Laois needed a fast start to the second half but instead it was Wexford who got the first two points via Paul Morris and Conor McDonald.

Laois hit back through Seán Downey but they now trailed by six points but the deficit was out to nine when McDonald (2) and Morris scored again after 41 minutes.

And it was game over a minute later, Laois failed to clear their lines and the ball eventually fell to Aidan Nolan who beat Rowland from close range.

Shaun Murphy then added a point and Wexford led by 13 with 25 minutes to play.

Laois had to dig in to avoid things becoming embarrassing and Ross King hit a free but that was instantly cancelled out by Conor McDonald.

King took Laois’s total to 12 points and his own to sixth with his fifth free and although Willie Dunphy raised another white flag, Jack Guiney rammed home Wexford’s third goal to snuff out any faint hope of a comeback.

But Laois didn’t give up and Mark Kavanagh struck a point with his first touch after coming on following a long injury lay-off before Paddy Purcell scored Laois’s first after reacting quickest to a breaking ball on the 14 metre line.

That left ten between them but with 15 minutes to go, Laois were reduced to 14 men. Cha Dwyer was issued with a second yellow card after becoming involved off the ball with Lee Chin, who picked up a yellow card for his part in it.

And Wexford rammed home their numerical advantage from here. Paul Morris and Conor McDonald rose white flags to put 12 in it and the margin remained like that after Cian Taylor and McDonald traded points.

King and Paul Morris traded points before Laois were reduced to 13 men after Willie Dunphy was shown a straight red card for a high tackle.

Laois kept trying with Aaron Dunphy pointing but Wexford were rampant now and finished the game with 14 points to spare.